There are a lot of things that can happen in this day and age that weren’t possible way back when. For example, asking an airline directly if you can have your money back for a flight for no other reason than it would be super awkward to go to that destination now.

That’s just what Courtney Duffy had to succumb to. And you won’t blame her in a moment. You see, Courtney was a bridesmaid in her friend Alexandria’s wedding, and had booked her cross-country JetBlue flight for the wedding. But somewhere in the middle of all this, Courtney, an MBA student at Ivy League Dartmouth College, had gotten caught up with school and her schedule prevented her from going to Alexandria’s bachelorette party and challenged her with other bridesmaid duties.

If you’ve ever been a bridesmaid, you know that it’s no easy task. It’s essentially like taking on a new part-time job—so if you’re crazy busy already, it can be hard to prioritize bridesmaid duties. It wasn’t that she didn’t care, she was just dealing with her own stuff.

However, on the bride’s side, she could see that Courtney wasn’t quite fulfilling her bridesmaid duties as she hoped, so she sent her an email asking her to “relinquish [her] duties as a bridesmaid.”

The tone of the email was surprisingly amicable. She started off telling Courtney she was happy she booked her flights and she’s sorry that classes were taking its toll on her—but that it meant so much she was trying. However, she then had some pretty harsh news to share.

“I have a massive favor to ask you, though – and this is one of the hardest things I’ve ever had to ask anyone – but I need to ask you to relinquish your duties as a bridesmaid,” she wrote. “When I asked you, I was really hoping that you could be a part of this whole thing—the bachelorette trip, at least the weekend, prep and the full night of the event . . . the whirlwind nature of what your travel has become just won’t work with the duties as a party member. I’m so, so sorry!!” 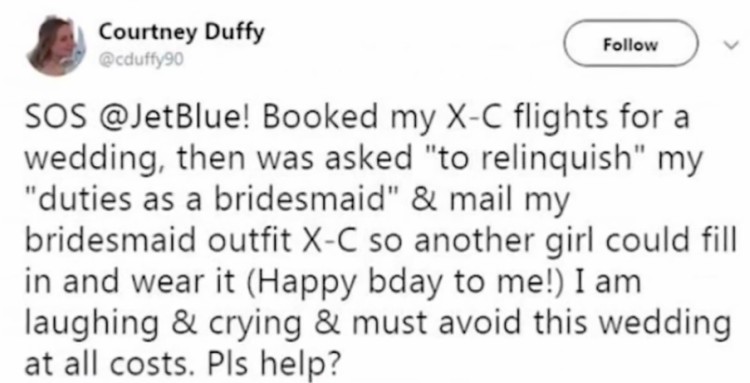 Alexandria went on to say that still wanted Courtney to come to the wedding, and even offered to pay for Courtney’s jumpsuit, which she was supposed to wear in lieu of a bridesmaid dress in the wedding. Though the reason was because there was a new girl who was going to take Courtney’s place—but still!

“I’ll Venmo you the postage and the cost of the jumpsuit — just let me know the total,” Alexandra wrote, an apparent effort to cushion the blow. “And if you’d like to chat on the phone, let me know! I promise we’re totally cool!”

We’re not sure how these friends could be “totally cool” after something like this—and apparently Courtney thought the same, and figured there was no way she could show her face at the wedding. She decided to send a tweet to JetBlue to help her out. The hilarious, relatable tweet has gone viral for obvious reasons:

“SOS @JetBlue! Booked my X-C [cross-country] flights for a wedding, then was asked ‘to relinquish’ my ‘duties as a bridesmaid’ & mail my bridesmaid outfit X-C so another girl could fill in and wear it (Happy bday to me!) I am laughing & crying & must avoid this wedding at all costs. Pls help?”

While most people found it relatable, some found it questionable (debates like “uh, if you can’t go to the wedding, then you shouldn’t be a bridesmaid” popped up), but the actual airline, JetBlue, seemed to be pretty invested in the case.

To find out what they tweeted back—trust us, it’s amazing and hilarious all in one—check out the video below!