Bride Discovers Proof of Groom’s Affair the Night Before the Wedding, So She Reads His Racy Texts Aloud Instead of Her Vows

Have you ever had a moment when you were glad not be in someone else’s shoes? That’s exactly how you will feel once you read this story about a bride-to-be.

Going by the alias “Casey”, she outlined the reasons for her stomach being in knots on her wedding day. It wasn’t jitters. It wasn’t an illness. According to her account to Whimn, it was worse.

The night before her big day, Casey was celebrating with some of her closest friends in a hotel suite. Then her phone signaled she had a text message. Thinking it was another well-wisher, she picked it up and found a series of screenshots from an anonymous number.

They contained photos of another woman with her fiancé, “Alex”, and text message exchanges between the two. The only thing the sender wrote was, “I wouldn’t marry him. Will you?” In her gut, she knew these messages were real. She knew her fiancé was guilty of being unfaithful:

Against her tears and pain, and against the rallying cries of her supportive friends, Casey decided not to call him. She didn’t want to confront this cheater, though the wedding was scheduled for the very next day.

So, she walked down the aisle the next day, looking sad when she met him face-to-face at the altar. But the ceremony did not begin, because Casey announced that “Alex is not who I thought he was.”

She slipped her phone out from under her bouquet and proceeded to read each message the anonymous person sent – in front of EVERYONE. As guests sat there looking stunned, Alex stormed out. 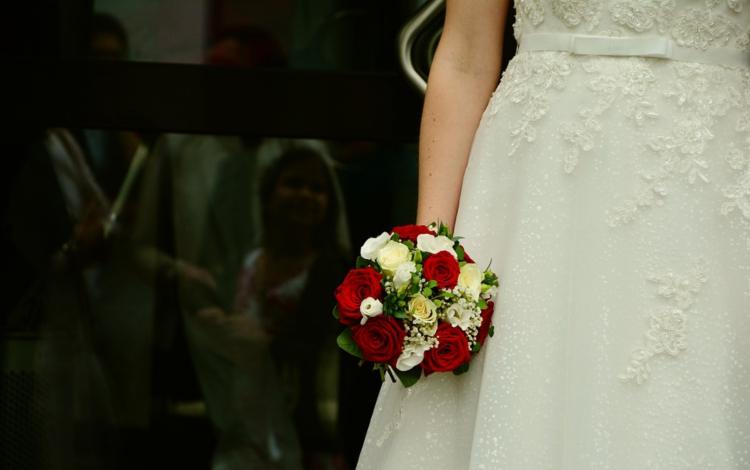 There wasn’t a wedding, but Casey thanked her friends and family who showed up and instead turned the event into a party that celebrated real love and honesty. That’s how she chooses to remember that day.

Have you ever witnessed sad turn of events like this? Can you relate to Casey? How would you have handled things if you were in her shoes?