No matter what, there’s always going to be someone who has an opinion about breastfeeding—especially when it comes to breastfeeding in public.

Moms who do it are just trying to feed their babies. And those against it think it’s inappropriate to show that much skin in public. So where do we agree to disagree? Apparently nowhere.

One Ohio breastfeeding mama of twins named Jennifer Mancuso attempted to breastfeed her 18-month-old twins at their daycare when the director told her she needed to go into a different room. A really, really small room.

Before this, Jennifer had never had any issues with breastfeeding in public—no one had ever told her to move or that she wasn’t allowed to be dong what she was doing. She hated the feeling.

“I started to nurse on one of the chairs and the director said, ‘Hey Jenn, I’m gonna need you to nurse in the back. The employee break room (which is no bigger than a closet) is where you can nurse from now on,’ ” Jennifer said in he caption.

When Jennifer blinked her eyes and told her she wasn’t sure if it was even legal to tell someone to go feed their babies in a tiny closet, the director told her that it was the regional manager’s policy “because we have school age children,’ ” Jennifer wrote. “Pause—SCHOOL AGE CHILDREN?! As if implying what I’m doing is inappropriate for older children to witness?!”

“The manager of the location chimed in and stated that also it’s to protect other parents who may find it offensive, because of their religious beliefs,” Jennifer continued. 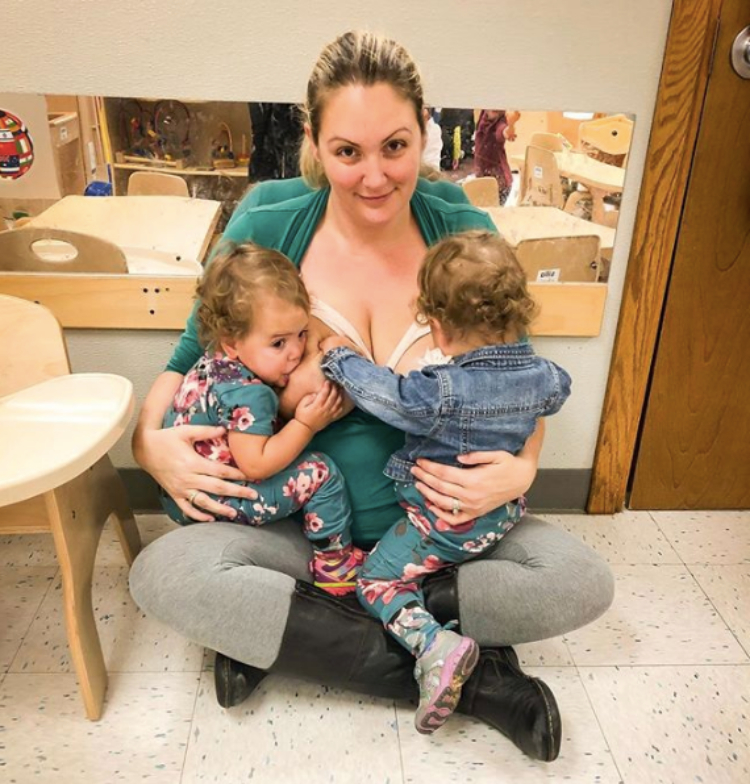 Jennifer says that drop-off and pickup from daycare was the best time to feed the kids, which is why she was doing it then. “Because of my schedule with my older two, it works best for me to breastfeed the twins at drop off and at pick up,” she said. “That way they are still getting mostly breast milk through the day and maybe a little water or formula with their lunch.”

So naturally, it was a punch to the gut when she was shooed away—especially since she’s been sending her kids to that daycare for years and she never had any issues before.

Thankfully, it took a couple of months, but Jennifer finally received an apology for how she was treated.

“Her tone was completely apologetic,” she said. “She explained how sorry she was about how her comments as well as the regional managers confusion made me feel. She saw how negatively that could make a new or insecure breastfeeding mother feel and potentially ruin a journey.”

She had told her that the policy was going to be amended and she’d never have to hide herself from breastfeeding in public again.

We’re glad this story has a happy ending! What’s your opinion on public breastfeeding? How do you feel about how the director handled the situation?