Cautious parents teach their children about the dangers of swimming. Those hazards include running, diving, and of course, drowning. Now there’s something else to add to that list: attire.

Browse any kids’ clothing section during the spring and summer months and you’ll be surrounded by bathing suits. For boys, the standard is swimming trunks with a built-in mesh lining in the crotch. As one mom found out, that netting was a nightmare come true.

British mother Laura Collins and her 5-year-old son Jack spent some time in the pool while on vacation in Spain. Upon returning to their room, Laura attempted to help her son wriggle free from his swim trunks. But she didn’t expect what happened next. In her words:

“He let out the most gut-wrenching scream I’ve ever heard; it’s a sound no mother should ever hear.”

His penis became entangled with a hole in the netting, causing him agonizing pain. Laura carried Jack to the receptionist and asked for some scissors. She was unsuccessful at freeing him, so staff directed her to their health center. They too were unsuccessful at undoing the ensnarement and informed her he needed to go to the hospital.

At that point, the tot’s skin had begun to bubble, making it look like the skin was about to burst. Laura rushed him to the local hospital where an anesthetic needed to be administered before extracting the mesh. Finally, doctors were able to stop the strangulation. Concerned about urinary tract damage, doctors kept him under observation for a few hours before sending him home. 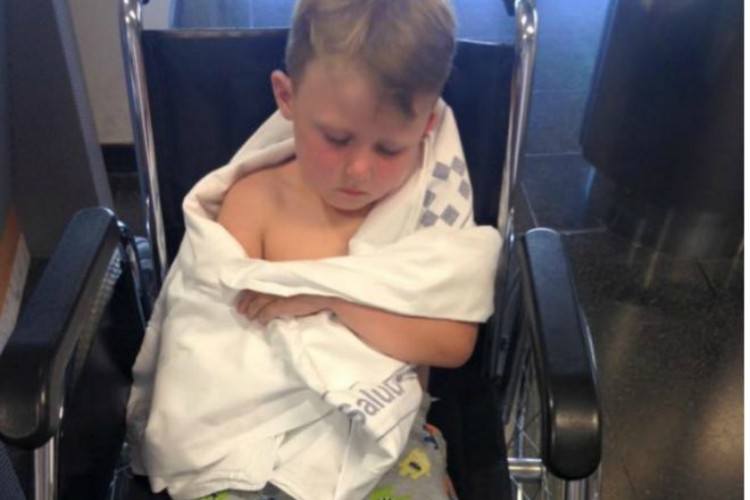 Daily Mirror
Laura was shocked to learn that this was not the first incident the hospital had seen. Other little boys suffered like Jack from the mesh lining in their trunks. Tesco, the company responsible for selling the trunks, issued an apology to the family and vowed to open an investigation with the manufacturer.

Laura wanted to caution other parents about the netting trap and strongly suggests that the mesh be cut from kids’ suits. As for Jack, he made a full recovery but is also looking out for others. Laura shared this with the Daily Mirror:

“He talks about how he nearly lost his willy on holiday and goes on about the naughty netting. He’s been warning all his friends as he doesn’t want the same thing to happen to them.”

Swim trunks with netting have it to provide support in the crotch area. But it can limit safe and comfortable movement when in the water. One parenting site, Dr. Momma, urges parents to remove the lining from swimsuits because it can cause friction irritation, inflammation, or ensnarement.

Should the worst scenario occur and the skin gets caught, their advice is to apply petroleum jelly to the site until you can gently remove the genitals. Submerging the area in lukewarm water can also relax blood flow to the painful site until first aid can be rendered. If you’re unable to undo the tangling on your own, seek medical attention.

A quick scan of similar stories on the internet will reveal that Jack’s experience is not an isolated incident at all. Other parents have shared harrowing tales of boys getting hurt from the mesh too.

What do you think about Jack’s experience? Were you aware of a problem with mesh netting in boys’ trunks?