You know what’s heartwarming to see? Young people taking on adult-like responsibilities all by themselves, and really loving doing it.

A 12-year-old boy named Reginald Fields recently decided he wanted to open up his own business cutting lawns in his hometown in Ohio. And so, Mr. Reggie’s Lawn Cutting Service was born, and Reginald got to work, mowing all the lawns he could get.

Well one day, he and a few of his cousins who he often asks to help him out were mowing a woman named Lucille Holt’s lawn in Maple Heights. During that time, one of her neighbors called the police to report that the group of kids accidentally cut a patch of their grass on their yard.

“They called the police to tell the police that the kids was cutting their grass,” Holt said. “Who does that?”

The hardest part of it to get around is that the part of their grass they were referring to doesn’t have a clear marker of whose side its even on; there’s no fence to determine where the property ends or begins, it’s was just a patch between the two yards.

“You called the police cause the kids [are] out here cutting the grass, and they cut the grass that wasn’t part of our grass?” a clearly angry Holt said. “I don’t know what part is my grass and what part is your grass.”

It does seem a little strange that this neighbor wouldn’t have just gone outside and calmly told Reginald about his problem with his accidentally cutting the grass. It surely wasn’t intentional—Reginald said he had absolutely no idea that he did that. Let’s remember, he’s only 12! 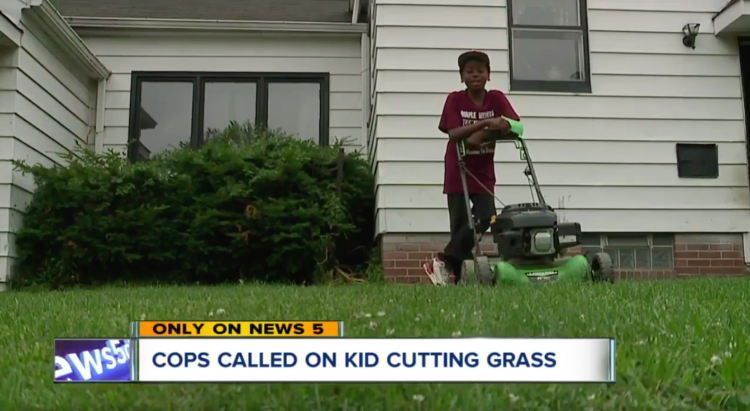 “They said I was cutting their grass,” Reginald said. “I didn’t know it!”

Holt said she knew exactly which neighbor had called because she’s had issues with them in the past. Apparently this neighbor has called the police on Holt several other times before: once when her own children were throwing snowballs at each other and another time when her son was crying after she was disciplining him.

While Holt (and most of the world) were pretty upset over someone calling the cops over a 12-year-old mowing a lawn, there’s actually some good that’s come out of it. Because of the attention this story has gotten, Reginald’s business is starting to boom! He’s getting more calls than ever before with people wanting him and his cousins to mow their lawns.

“People are inboxing me like, ‘How can I get in touch with this children? Where are they at? I got property I want these kids to cut,'” Holt said.

We know what you’re thinking: What’s a 12-year-old going to do with all the money he’s earning from lawn cutting? Well, he’s got big dreams to put all the money he’s making away in savings to eventually buy new equipment and grow his business as much as he can.

Man, we wished we loved anything as much as Reginald loves what he does, and were as dedicated as him! We wish him the best of luck in his career endeavors.

For the WEWS News Channel 5 report on this story, check out the video below.

What do you think of the neighbor calling the cops on Reggie? If you live in the area, do you think you’ll try to get in touch with Mr. Reggie’s Lawn Cutting Service to get your lawn mowed by Reginald?