Ah, the zoo. There’s something so fun about walking around on a summer day looking at all the unique animals in the world in one spot. Though fun as an adult, it’s especially fun when you’re a kid, getting to experience all the animals for the first time.

Personally, I think one of the coolest animals at zoos are the bears. They’re really not that scary! At least when they’re not in the wild in their natural habitat. People always assume bears are so frightening, but they’re actually pretty intuitive animals.

In fact, bears communicate with their body and/or using facial expressions, and also have decently good sense of hearing, touch, and smell. Additionally, black bears can remember things relatively well—they have some of the best short- and long-term memory of many animals.

Because of their size, people are automatically scared of black bears. Some can weigh up to 600 pounds, and are about 200 pounds when on the small side. But because of all the qualities they have mentioned above, they’re not actually too scary if you don’t initiate anything with them.

They’re especially safe at the zoo—and instinctive, as we mentioned. One little 5-year-old boy named Ian Parker, who was visiting the Nashville Zoo one recent day, proved that when he stood in the bear exhibit admiring a black bear from behind the glass. 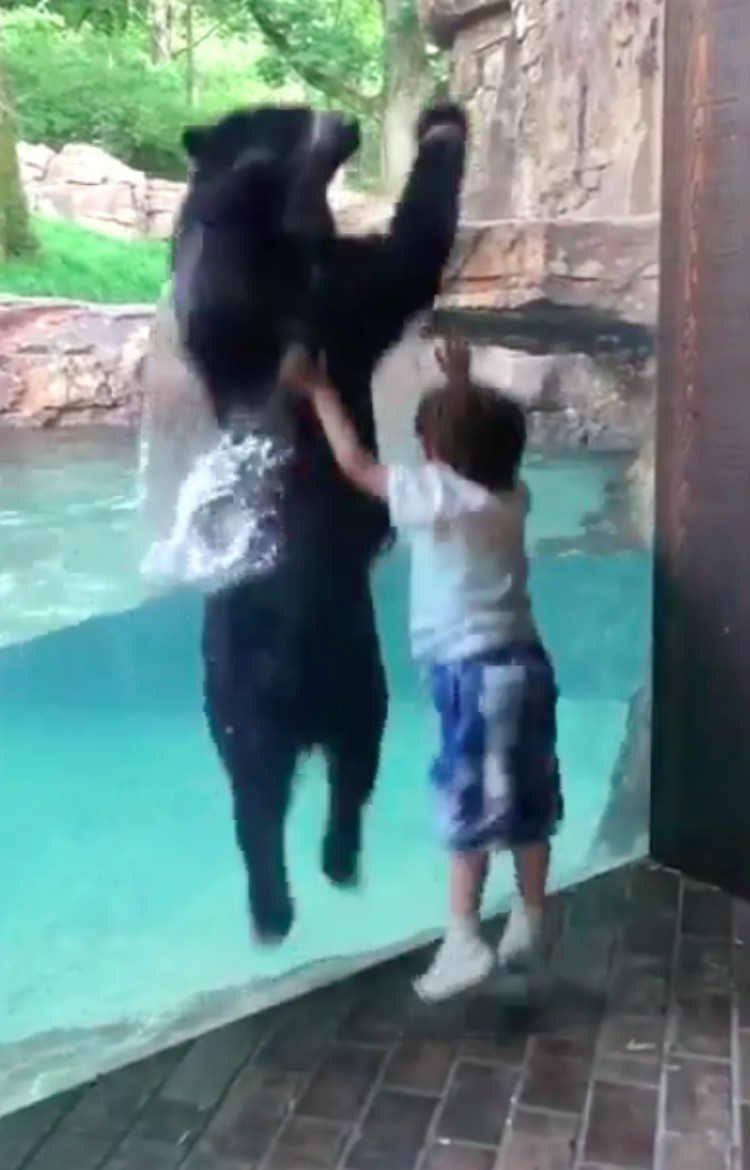 When the black bear was standing on his two legs, he was only just a little taller than the boy, so he must have thought he and the bear were just about the same age—too precious.

The boy held his hands up and started jumping right on the glass—and the bear? He unexpectedly followed suit! The boy jumped, then the bear jumped, and so on. As long as the boy continued to jump for joy, so did the bear, mimicking the boy to a T. He even looked like he was having fun like the boy was!

While it might seem a little terrifying to have a bear that close to such a young boy with just a glass window between them, you can tell the bear wasn’t angry at all, and just wanted to play and mimic the boy. There’s even a point they began to jump in almost perfect unison.

If this was a game of “who could jump higher?” the bear probably would’ve won, but we definitely can’t tell who’s having more fun here.

The video below may be less than 20 seconds long, but we’re certain that when the boy’s parent stopped filming, the jumping kept going. It’s honestly probably the cutest thing you’ll see all day!

Any time we see a child and animal interact in a way that’s a bit unusual, we can’t help but smile. Check out this sweet video below of the boy and bear jumping for joy with each other!

What do you think of this adorable video? Would you ever let your child jump with a bear like this with a glass barrier between them?