It’s not uncommon to see changes in our skin from time to time. Bumps, lumps, and bruises, while often scary, are usually just your skin just going through normal processes. But in some cases, these changes in our skin are more of a warning sign than anything else; they’re our bodies telling us that something is wrong.

This strange bodily change is definitely one of those signs.

Have you ever noticed a black stripe on someone’s fingernail? Maybe you’ve noticed this type of marking develop on your own nail. This ominous-looking sign could have equally as foreboding consequences if this change isn’t looked at by a medical professional. 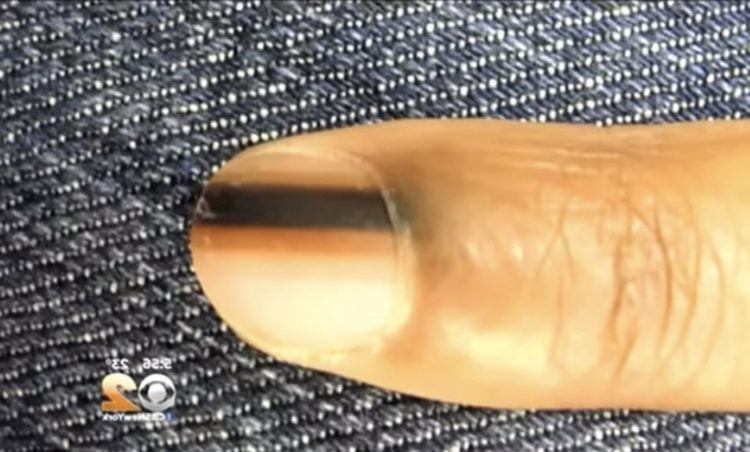 Cancerous tissues on the skin, known as melanomas, can develop under the fingernail. Studies have found that this effect happens more often in people of African descent, but it absolutely can happen to anyone, regardless of their race, gender, or anything else.

Found early enough, removal of the nail and the cancerous growth under it is sufficient for solving the problem. Leaving this warning symptom unchecked can cause the cancer to metastasize to other organs, which can ultimately result in death.

Nail cancer isn’t a cancer that you typically hear about, but this type of skin cancer shouldn’t be underestimated; nail cancer (or acral cancer) takes thousands of lives a year. A variety of the cancer was even thought to be the form of the disease that ultimately led to the death of famous reggae singer, Bob Marley. 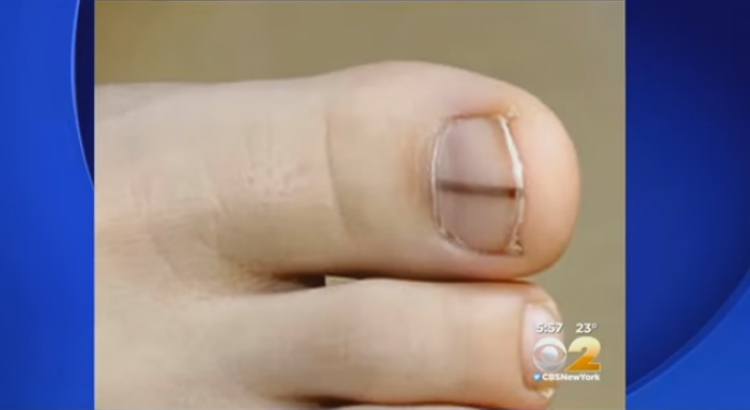 A brief expose on the cancer and this warning sign on the nail was covered by New York’s CBS News. The newscasters interview Dr. Dana Stern, an local New York dermatologist who specializes on nail-beds and nail care.

Dr. Stern warns to be vigilant about the state of your toe and fingernails, warning that while this may not be a commonly discussed sign of cancer, it is a red flag nonetheless.

“People will sometimes develop an earl melanoma and think it’s an injury,” Dr. Stern said. “They don’t even realize that they need to see a dermatologist right away.”

The most common nails to see this dark stripe under is the thumb, big toe, and index finger. There are also signs that the stripe is more than an under-the-nail bruise, including:

Treatments of this cancer vary on the stage in which it has been caught. If discovered early enough, the nail tissue or nail may only have to be removed. If the cancer is fairly well-developed, the entire tip of the finger may need to be amputated.

As with any cancer, skin or otherwise, staying educated and giving yourself regular self-examinations is crucial. Anything suspicious should be taken to your doctor as soon as possible, as the key to surviving this disease is early detection.

What do you think of this important information? Share your thoughts in the comments section below.