This is What a Black Dot on Someone’s Palm Means

On September 13, 2015 a Facebook post appeared online and quickly went viral. The post was an image of a woman covering her mouth with her hand while looking fearfully into the camera. Her palm was facing out to reveal a black dot was drawn there in dark ink.

Along with the powerful picture was a message with read:

“The black dot on the hand lets professionals know you’re a really vulnerable domestic violence survivor, and you need help but can’t ask because your abuser is watching your every move. In just 24 hours the campaign has reach over 6,000 worldwide and already helped 6 women. Please spread the campaign, and post a picture of your hand with the black dot, to show your support to all survivors of domestic violence.”

The post clearly asks that people spread the message and the campaign to help abuse survivors everywhere. And that was exactly what the internet did: it spread the message. The post got over 28,000 likes and 83,000 shares before it was taken down by Facebook, along with the Black Dot Campaign’s Facebook page. 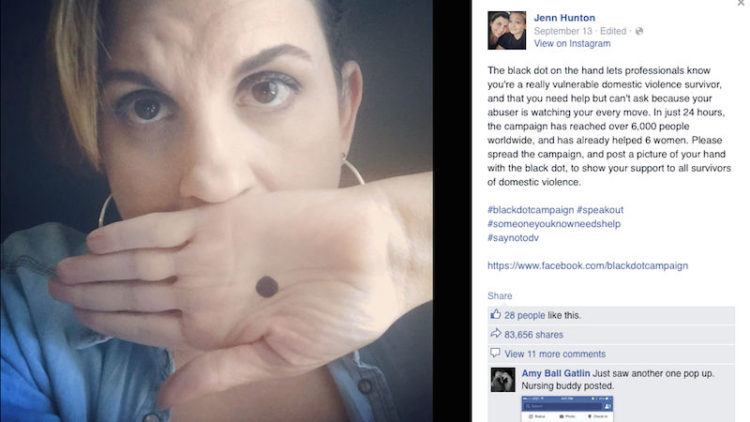 Facebook via Jenn Hunton
But why was it taken down? This is a fantastic campaign that gives abuse survivors the ability to call out for help when they are voiceless. Undoubtedly this idea saved some lives and put some bad people in police custody.

Well, yes and no. The answer to why is campaign is so good and so bad can be found in two subsequent posts published on the Black Dot Campaign’s Facebook group before it was taken down.

The Black Dot Campaign is to enable victims who can not ask for help verbally to ask for help with a simple black dot and people recognise this and help. This is a campaign to help the most vulnerable victims of Domestic Violence. They simply draw a black dot on their hands and agencies, family, friends, community centers, doctors, hospitals can recognize this person needs help but cannot ask for it.

Then on September 14, the campaign posted an “Important Notice,” which read:

The original ethos for this campaign was to enable a victim to put a dot on their hand around someone they trusted to enable a conversation to start, so they could open that door and hopefully start a process of seeking professional help. This is an idea, thinking outside of the box, trying to open up the worlds eyes and ears to what is going on in terms of abuse. The idea came from a former domestic violence victim.

Professional bodies have not been advised or trained in the Black Dot, what it symbolizes and what it means. When people contact us we open the gates of communication and put them in touch with people who can really help. Putting such a campaign on Facebook was about raising awareness on a social media platform.

This isn’t the solution that will help everyone, if anything it should help people realize what abuse is, how it affects people and how to access help.

And most importantly SAFETY MUST ALWAYS COME FIRST. If you see a black dot or are approached by someone for help, if safe to do so take them to safety and get them in contact with the relevant agency. Intervention and support should only be done by professionals.

Essentially, what they were saying is that this amazing campaign idea was created, but no professionals were told. Only the internet was.

Of course with the internet having such a long reach, it’s plausible to think that some professionals saw the campaign and were able to participate. However, most men and women who would have been able to assist abuse survivors were not trained to respond to this dot. It was merely an idea to try and help.

Not only that, but critics to the idea quickly pointed out that this campaign could get well-meaning people hurt.

Say you saw someone flashing a black dot on their palm and you rushed to their side or quickly called the police. That would be a just and kind thing to do…but it could also be a dangerous thing to do. 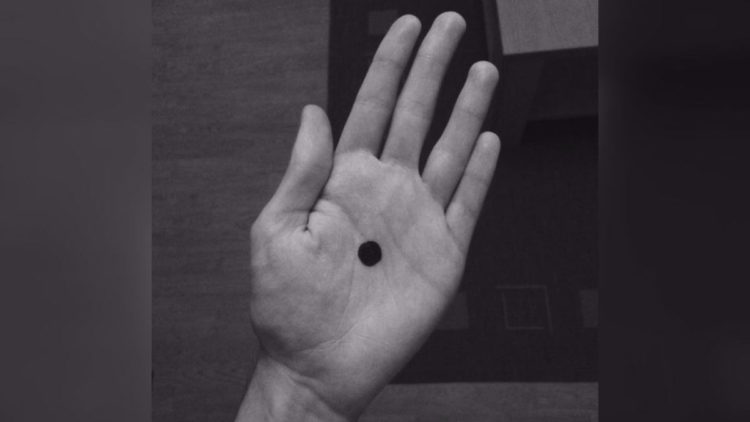 RedOnline
If the survivor in question needs to use this dot to communicate, that means their abuser is watching. He or she could have been made aware of what the black dot symbolized (the internet, like we said, it far reaching) and might go to any lengths to stop someone from calling for help.

Both you and the survivor could end up in a bad situation, when you were only trying to answer their silent cry for assistance.

By the end of that month, domestic abuse professionals were stepping forward to say they could not support the campaign for this very reason. Project Sanctuary was one of the organizations who spoke out against the idea of the black dot.

“The Black Dot Campaign is a very well-meaning idea, but a bad idea nonetheless,” said Dina Polkinghorne, executive director of domestic violence prevention organization Project Sanctuary in a statement. “The campaign is getting a lot of attention, so abusers may also be aware of it. They might question why their partner would have the dot on their hand. A well-meaning family member could also see the dot, and inadvertently compound the violence.”

Despite statements like this, the Black Dot Campaign showed no signs of slowing as 2015 ended and 2016 began. Nowadays, we certainly see less of the symbol online, but it is still used to bring awareness to the problem of domestic violence on various social media platforms.