As a pregnant woman, you have the right to choose what kind of birth you want; at-home, in-hospital, with drugs, all natural, ect. What you decide is usually based on your worries and beliefs, but oftentimes information from the doctors can sway your decision, too.

Well, not in the case of Natalie Bancroft.

Doctors told the Washington mom-to-be that her son was going to be large — larger than average. Usually, when mothers are told this, they opt for the use of drugs during childbirth to help cope with the pain or even for a C-section.

But, you guessed it, Bancroft didn’t have the “typical” reaction. The mom of two had her second child at home and naturally, with only the support of her husband and midwives to get her through the childbirth. She preferred it so much that she insisted on having her third child the same way, despite how large he would supposedly be.

It’s safe to say, however, that no one expecting the baby to be quite THIS big.

Birthing photographer Laura Fifield was there to document Bancroft’s four hours of labor, capturing her as she went back and forth from the birthing pool to the bathroom. 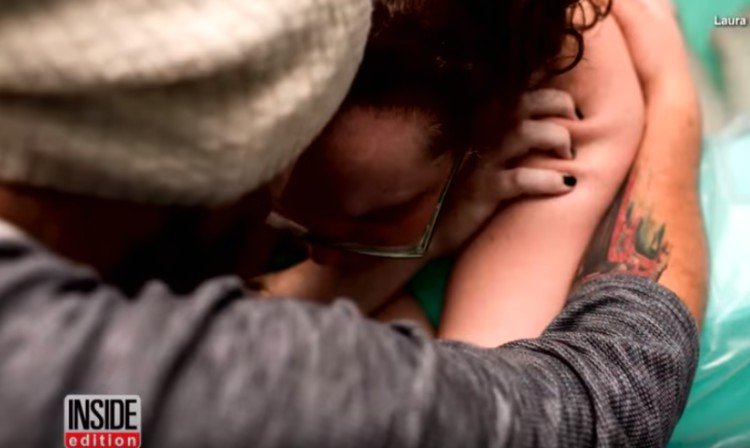 Inside Edition via Laura Fifield
Throughout the entire process, the photographer noted that the mother was very focused and “very, very calm,” Fifield said. “She had no problems at all.”

Her ease may have been because of the at-home atmosphere Bancroft prefers.

“It’s a different mindset than being in a hospital,” Fifield said. “The midwives take a hands-off procedure. They don’t check your dilation every hour.”

With most at-home water births, moms are encouraged to walk around, squat and let gravity help lower the fetus into the birth canal. This is exactly what Bancroft did very calmly for four hours, with Fifield taking great pictures all the while.

When the baby was finally crowning, Bancroft did something surprising; she threw her head back in the birthing pool and laughed! The pure look of relief on her face is surprising and hilarious, all at once.

Then the moment of truth: holding her little baby for the first time. Bancroft’s face says it all. 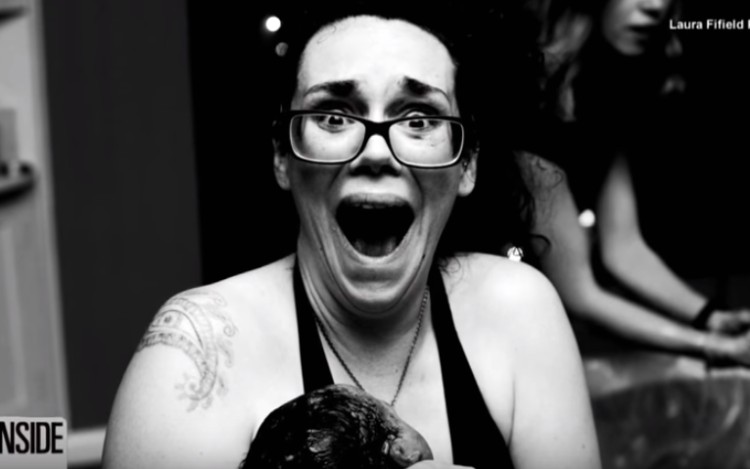 Inside Edition via Laura Fifield
Little Simon was anything BUT little; he came in weighing 11 lbs., almost four pounds larger than the average American baby. The midwives had expected him to be around 9 lbs., which is still large, but not quite as shocking as his actual weight.

For an even better means of comparison, consider that Simon was born the size of a four-month-old baby.

So when a tired Bancroft held her baby in her arms for the first time, the pure shock of his size is hilarious plastered all over her face! She’s probably shocked that he’s as large as he is, but she’s also that she managed to deliver him without any painkillers and relatively calmly!

What do you think of this surprising delivery story? Share your thoughts on this big baby in the comments section below.