If you lived in the 1990s, there are a few things you might remember: Listening to music on your Walkman. Eating Lunchables. Pogs. And above all: Beanie babies.

Beanie babies were all the rage in the later half of the ‘90s. The plush stuffed animals, created by Ty Warner, were stuffed with beans instead of the typical stuffing other toys would have, which he explained in a 1996 interview: “the whole idea was it looked real because it moved.” (Mind blown—we didn’t know that ’til right now. But we digress.)

Anyway, people went crazy over these little animals. Families would be waiting outside of toy stores before they opened to get the newest shipment.

While some people simply enjoyed collecting them, there was a lot of speculation that these little babes would be worth big bucks some day. At the time, they were being sold for $5-$7 or so a piece, but the idea was that they’d be worth thousands in the future.

In fact, there was even a Scholastic Beanie Baby Handbook that came out in 1998 that listed what each Beanie Baby was worth when it was first released, how much it was selling for in 1998, and what their estimated price would’ve been in 2008.

Now that it’s 2018, the numbers are way out of whack, but it’s still pretty interesting to flip through. For instance, Stripes the Dark Tiger was estimated to be $1,000 in 2008, but is actually selling for around $10 these days. 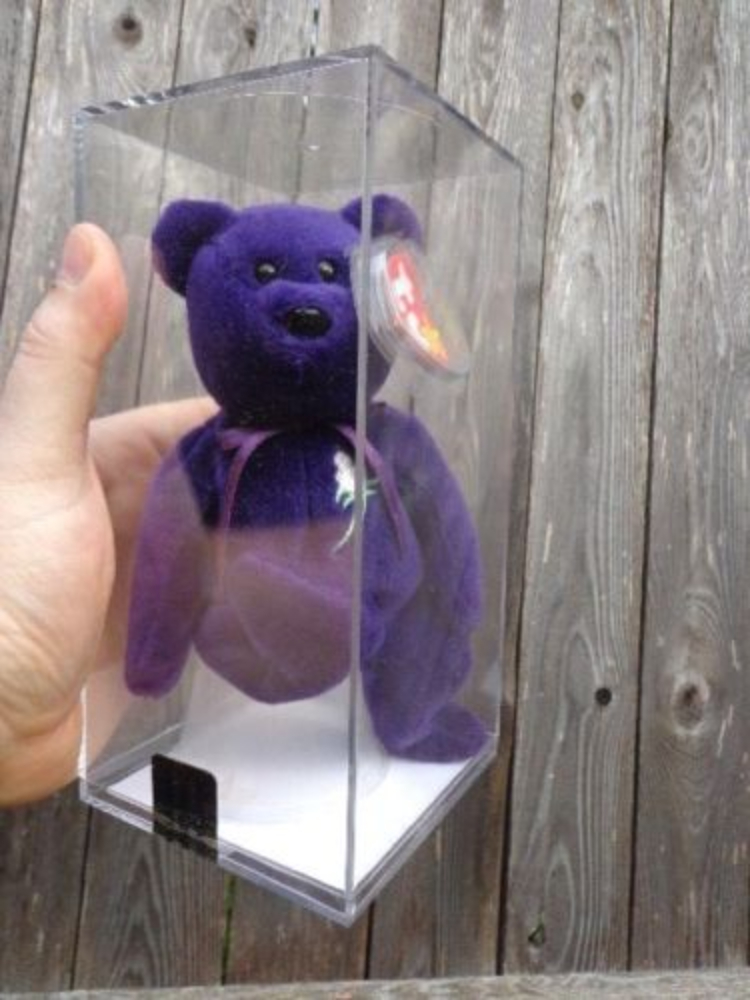 So are there any Beanie Babies that are worth any money? Maybe.

We say ‘maybe’ because if you look on eBay, there are actually quite a few beanies going for wads of cash. That doesn’t necessarily mean these people are going to make what they’re selling them for, but hey. You never know!

To be considered valuable, the Beanie Baby has to be considered a truly limited edition version. That means they either have some kind of variation where only a certain number of that kind were made, or it could be a factory error on their hang tags.

Take this “Super Rare Large Wallace” bear for instance, which is selling for $680,000! The seller claims this is the “rarest version” of the bear, and is in mint condition. There are a few others selling on eBay anywhere from $200-$800, so we’re thinking these aren’t as “rare.”

Another example: Princess Diana—the “ghost” version, which is selling for $675,000. “She is undoubtedly the RAREST of all Beanies and Princess Bears! AUTHENTICATED by Peggy Gallagher Enterprises Inc.,” the seller writes on the listing.

Let’s check out this listing for Bubbles the fish, who isn’t all too rare by normal standards—but this one selling on eBay is going for $176,000 due to its lengthy list of errors, including the wrong colored thread on his mouth, the wrong working in the Swing Tag Star, the inside swing tag lettering is not evenly inked, and more.

It’s crazy that simple rarities can rack up the price so much on a toy that used to sell for just a few bucks! We dig it though (that’s what they said in the ‘90s, right?).

Do you have any rare Beanie Babies hiding in the attic? Would you ever purchase one of these expensive rare ones?