How This Little Boy’s Burger Sent Him to the ER

We LOVE the Dollar Store – we might have mentioned it once or twice! – but there’s one item you should never buy from it: a barbecue brush. When it comes to cleaning your grill, this tool is one where you definitely want to invest in quality— and you might want to reinvest with a new product every season, AND avoid the bristle type of brush.

Why are we taking this seemingly simple purchase so seriously? Because it’s all about safety, and avoiding loose bristles, emergency room visits, and even multiple surgeries.

Everyone needs to pay close attention to the story of Anthony Fiore, a young boy whose family learned firsthand what a danger these seemingly harmless bristles can be.

The Fiore family, like many, were thrilled that spring was back. With the weather finally turning so nice, the family busted out their grill to have the first barbecue of the season! But before anything, Anthony’s mother, Nadia, quickly cleaned off the grill with their trusty brush. In no time the grill was sparkling clean and the burgers were sizzling.

But only a few bites into his burger, little Anthony suddenly felt a tickle in his throat, a tickle which quickly turned into a stabbing pain. As the minutes passed, the little boy’s pain grew worse and worse, and Nadia decided to take no chances; she rushed her son to the emergency room.

What would happen next is any family’s worst nightmare.

Anthony was fast-tracked to the hospital x-ray room where doctors discovered the source of the pain: a small sliver of metal lodged in his throat. They quickly determined that it was a piece of a metal brush bristle, one that had come free from the grill brush and got cooked into the little boy’s burger. 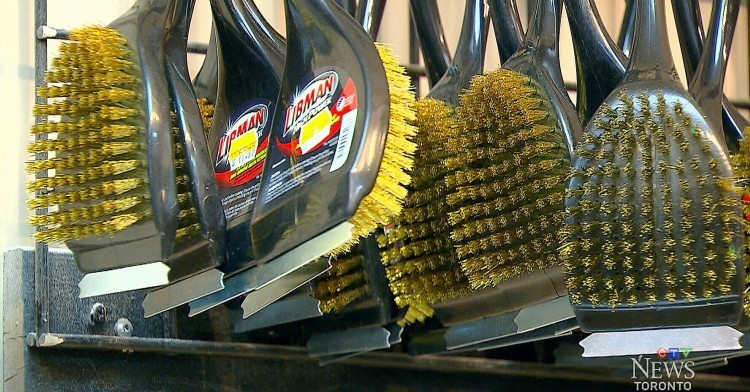 Worse of all, if the bristle moved any further into Anthony’s body his organs could be punctured, which could lead to more serious complications. Doctors quickly ushered Anthony into emergency surgery to remove the bristle before it broke loose and made things even worse for the boy.

Luckily, the emergency surgery was successful. But the situation was far from over.

Days after the surgery was complete, Anthony developed a serious infection from the dirty bristle. It took a heavy round of antibiotics and close medical attention, but after some more time, the infection cleared up. Anthony was finally free to leave the hospital.

CBS News spoke to Dr. Aziz Benbrahim, a general surgeon at MidState Medical Center, about cases like these. The expert said the levels of severity vary from case to case, but that this tragic mistake could happen to anyone.

Dr. Benbrahim spoke about one man who came into the emergency room after weeks of severe chest and stomach pain. An x-ray showed a piece of metal brush bristle punctured his stomach and caused other serious damage.

“I had to open him up completely. Then we remove this wire and we found out also why he had chest pain — because he also had pulmonary embolism, which is a blood clot in his lungs,” Dr. Benbrahim said. “He was just lucky he was still alive. All from this wire.”

CTV spoke with Michael Rumolo, manager of Toronto store Dickson Barbecue Center, about why this is a common occurrence with grill brush bristles.

“A lot of things that go wrong with bristles coming out are overuse and the quality of the brush in the first place,” Rumolo said, adding that it’s best to replace your brush every season.

Besides replacing your brush every spring/summer, it’s important to buy the best quality brush you can, according to Rumolo. There are also different types of brushes – like those made of nylon or cleaning stones – which don’t pose this bristle threat. If you do continue to use a traditional bristle brush, just make sure to check your grill surface thoroughly after cleaning, to remove any fallen bristles before it’s too late.

What do you think about this surprising threat? Share your thoughts in the comments section below.