From the time they’re in the womb, babies have a love for music. It’s soothing, fun, and gets them up and moving to the rhythm. Some even have genre preferences, the telltale signs being tears, dancing, or waking up from a deep slumber.

Among the special categories of music is the voice of Mom or Dad. In some families, a singing parent is merely tolerated, not really appreciated. It doesn’t matter if it’s done a cappella or with the radio, your kids’ reaction is not always favorable. But there are plenty of mommy and daddy vocalists who kill it.

For Yoni and Nina Tokayer, the husband and wife singing duo who make up the group Yonina, their baby girl Ashira is the judge. The harmonizing team decided to let their daughter sit in on making the video below. Singing a cover of Matisyahu’s “One Day” a cappella, the two are sitting in a car with Ashira on Mama’s lap.

Singing without background music is a huge challenge, but it can separate crooners from wailers. We’ve seen it on TV, and chances are you’ve sat through a performance or two. You either enjoy it or you sit there wondering if you’ve just witnessed a banshee sighting. In this case, baby Ashira immediately stopped fidgeting as soon as she heard her mother’s voice start the first verse.

When her dad chimed in, Ashira’s gaze was fixed on him. Hypnotized. That’s when we first see her gummy smile. Awww! Keep watching to see how Yoni and Nina mesmerize their adorable baby with their singing. Their beautiful melody holds her baby attention for the entire time, but her expressions are pure cuteness. 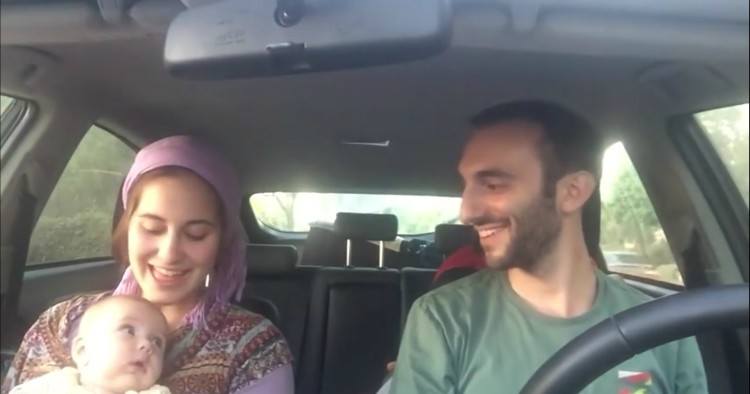 Yoninamusic
Yonina’s been posting videos online for a little over a year, singing cover songs by popular artists like Bob Marley, Bob Dylan, and Guns N’ Roses. Their most popular hit, however, has been this clip shot with their biggest fan. How they ended up being carpool rock stars was not planned though.

Their first version of “One Day” was recorded in their kitchen and quickly posted to Facebook right before they left home for an outing. But Yonina soon learned there was no sound. So, they re-recorded the song once they arrived at their destination, much to the delight of their baby and millions of fans all over the world.

According to their Facebook page, the couple has been able to take their duets on the road, traveling around Europe and the Middle East. Their baby daughter, now a little older, still makes appearances in their weekly web videos too.

Ashira is clearly in love with her parents and the sound of their voices. By the sound of it, we’re confident that their lullaby game is probably on point too. Lucky her! It’s also interesting to note her name means “I will sing”. We betcha she will!

What do you think of Yonina’s family harmony? Have you known any babies who loved the sound of your singing? Do you have parents who can carry a tune? Share with us in the comments!