Artistic Rescue Pig Has Raised Over $145,000 for Artwork That She Painted Herself

You know how you’re told when you’re younger “you can be anything you want to be”? Well, that even applies for pigs.

One pig appropriately deemed “Pigcasso” is a better painter than even some of the most famous artists out there.

Pigcasso’s talents were discovered not long after she was rescued in 2016 from an industrialized hog farming facility. The pig now lives in a farm sanctuary near Cape Town, South Africa called Farm Sanctuary SA with her owner, the sanctuary’s founder, Joanne Lefson.

In fact, Lefson was the one who discovered that this pig had a talent for painting. She had given her some random toys and items to play with, and she realized that oddly enough, more than anything else in the pile, the pig was drawn to the paint brushes. 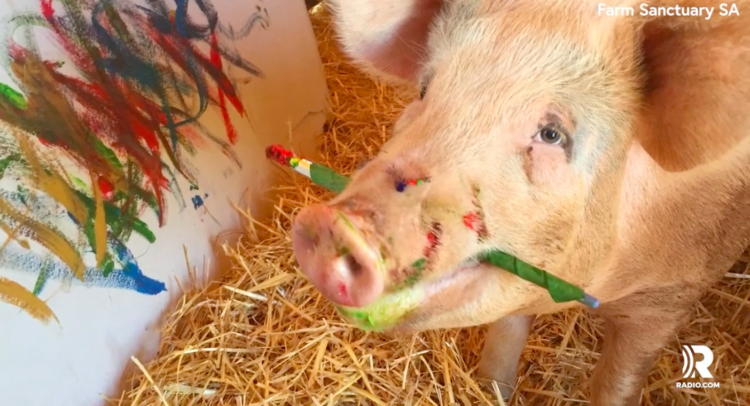 “For some reason she took a knack to the paintbrushes and it wasn’t long before she was dancing the brush across the canvas and selling artworks all over the world,” Lefson told CBS News. san It sounds like something out of a movie, but it’s not. Pigcasso began to use the paint brushes to make all sorts of masterpieces. She now uses a special tailor-made brush and nontoxic paint to make all of her artwork safe and practical. (And yes, we just used the word “practical” to describe an artistic pig.)

The cutest part of all is that Pigcasso is proud of each of her pieces of art—and shows that when she signs the corner of each painting with the tip of her snout using beetroot and acrylic ink.

People from all over have become completely infatuated with the art that Pigcasso is producing that they’re paying anywhere from 500 and $4,000 for pieces! All sales of the artwork benefit the sanctuary. 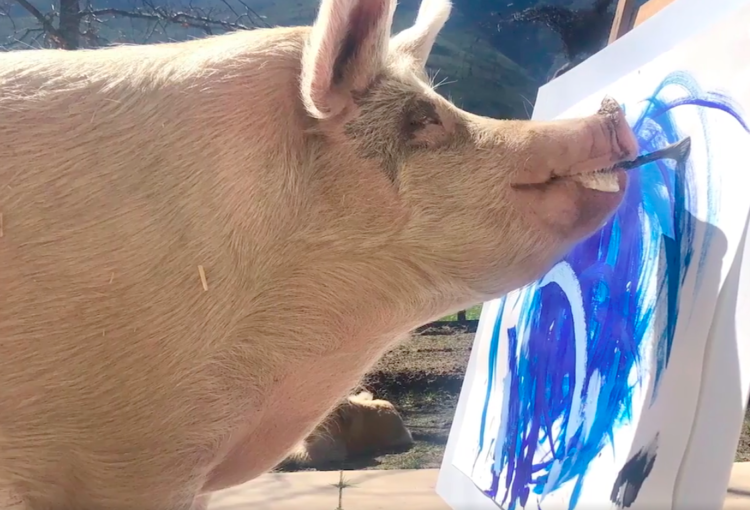 According to Lefson, the sanctuary uses the money raised from Pigcasso’s artwork to rescue more farm animals as well as “educate the general public on the atrocities of today’s factory farming practices that don’t just harm animals but also ones health and environment.”

Over the years, and countless pieces of artwork later, Pigcasso’s work has brought in close to $145,000 for the sanctuary. How amazing is that?

And that’s not all for this talented pig. Pigcasso has recently just launched a collaboration with Swatch, a watch company, featuring her brush strokes to celebrate the Chinese Year of the Pig.

“They gave guidelines on the colors and general style, Pigcasso did the rest,” Lefson said said. All proceeds will also go to the sanctuary.

Swatch found Pigcasso after encountering her “OINK” exhibition. That was in 2018, when Pigcasso became the first animal to host her own exhibition.

Seriously, could a pig make us feel any worse about our life? Just kidding—we think this is pretty amazing, and so does her owner.

“I am so proud of Pigcasso,” Lefson said. “From pork chop to global Swatch designer, it’s just another reason to see pigs as the smart creative divas that they are — and to eat less bacon and to go shopping instead!”

You can peruse some of Pigcasso’s stunning artwork here! And to see Pigcasso in her artistic element, check out the video below.


What do you think of Pigcasso? Would you ever buy any of her artwork?