We think you’d be hard-pressed to find a high schooler who doesn’t have a strong opinion on prom—they either love or hate the idea of getting all gussied up for the social event. While many young ladies tend to choose their dresses from a handful of local department stores or online shops, one creative teen decided to forgo the conventional route and make her own.

You see, Jacksonville’s Jadyn Duguid found a way to stand out at her school’s biggest dance of the year for all the right reasons.

The idea to make her own gown first came about when she attended her first prom and noticed an uninspiring trend. “I saw, like, five girls in the same dress at prom, and I thought that was super weird because they were spending so much money,” she tells News Today 24. “They all just looked really similar and familiar.”

Yep, we are having flashbacks of our proms right now, too! Senior prom was filled to the brim with girls wearing the same style, if not precisely the same dress. Not exactly the best way to show your individuality on the biggest night of your teenaged life, huh?

So Jadyn, being the artist that she is, found a way to save some cash all while literally wearing her creativity on her sleeve. That’s right, the innovative gal actually added paint to both of her prom dresses. 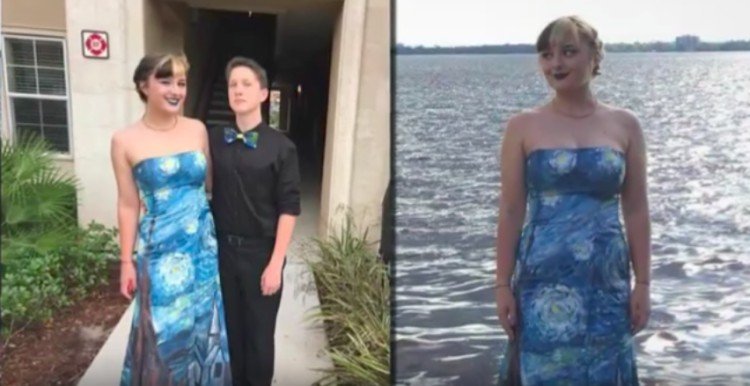 For her junior dance, she repped Van Gogh, wearing a Starry Night homage, but it’s her stunning senior dress that has really made a splash…

The teen decided to go a bit darker this year, by recreating Edvard Munch’s The Scream on a $40 wedding dress that she picked up at her local consignment store. 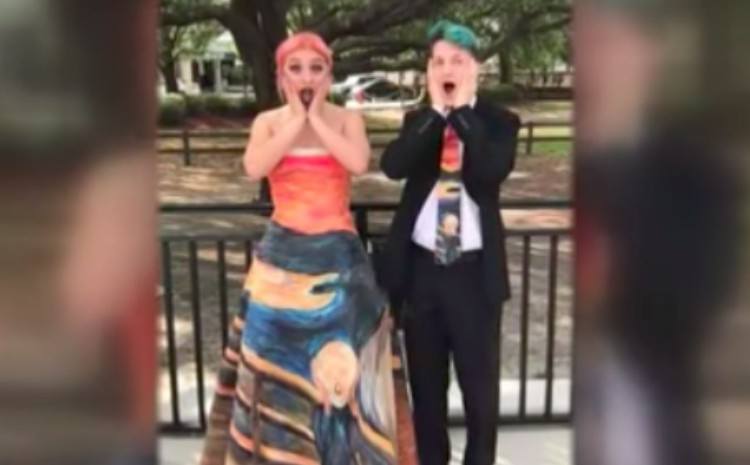 When she located the perfect dress, Jadyn turned on some Netflix and got started on the 20-hour painting process. Believe it or not, she says that she was able to re-create the design with “really cheap, multi-purpose paint from Michael’s.” Who would’ve thought?!

After posting both dresses to her Twitter account, Jayden braced herself—after all, you never know when those Internet trolls are going to come out! Nevertheless, she says that she was met with “an overwhelming amount of positivity.” She was even tickled to hear from folks who wanted to try on and take photos of themselves in the unexpected gown!

So, what will become of these artistic frocks? Well, the trusty teen says that she plans on letting her Starry Night-themed one go. She’s playing the eBay game, and we wish her the best of luck—we think she’ll definitely make that 40 bucks back!

To see even more pictures of this incredible prom dress for yourself, be sure to click on the video below. If you have a kid who’s set to go to prom next year, we suggest you let them in on this tale—their enthusiasm could end up saving you some dough!

What do you think of Jadyn’s artistic prom dresses? Which one is your favorite? Did you make your own prom dress? Tell us all about your thoughts and experiences in the comments section below!