Before He Was A Star, He Was a Sergeant In The Army. Do You Know His Name?

If you love following the lives and careers of television and movie stars – and even, sometimes, if you don’t – one of the most interesting and funniest things is looking at their lives before they started their glamorous careers. It’s a way of reminding us that celebrity success often has as much to do with luck and being in the right place at the right time as it does anything else, and that as shiny and fancy as their lives might seem, celebrities really are humans “just like us.” Most of the time, the pre-fame lives of stars show that they were always dreaming and planning of eventually reaching Hollywood, going on auditions and waiting tables and doing embarrassing ads. Every once in a while, though, we learn something about about a celebrity’s life that puts their entire fame in a brand new light, and gives us a newfound respect for them and everything they’ve done— like, for example, serving in the United States military.

We’ve heard of other famous people serving in the armed forces before, of course. Elvis Presley was famously drafted into the army and inspired the musical Bye Bye Birdie in the process. Many of the stars of Hollywood’s Golden Era served in some capacity in World War II. For younger stars in the more modern era, that service is less of a common denominator. So when we heard about this actor – whose career was almost completely disrupted when he was drafted to serve in the Vietnam War, but then went on to not only serve with pride and honor, but also earn monumental acting success – we were pleasantly surprised! We’ll give you some clues and see if you can guess who it is:

You’ve got it now, right? The answer is Tom Selleck! 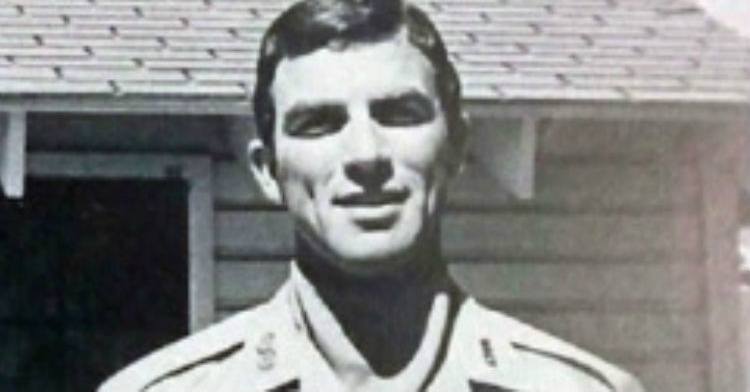 That’s him before he reached his current level of fame. Can you believe he almost didn’t come to be the icon we all know and love? It’s true. When he returned from active duty in the National Guard, Selleck actually found that he’d been fired from Twentieth Century Fox, with whom he’d had a contract before he was drafted. Undeterred, Selleck pursued his acting dreams with determination, won the title role on Magnum, P.I., and, well . . . we all know the rest. While some might have had resentment for the disruption to their plans his dropped contract represented, Selleck only has good things to say about his time serving in the armed forces, as Military.com reports:

The military left a strong impression on Selleck, who recalls his service with pride, “I am a veteran, I’m proud of it,” he said. “I was a sergeant in the U.S. Army infantry, National Guard, Vietnam era. We’re all brothers and sisters in that sense.” [. . .] Although Selleck hasn’t been in the military for decades, he maintains strong sentiment and support for U.S. troops. “We learned a lesson as a country over time, that we need to welcome our troops home regardless of whether you have political problems with whatever mission they’re on, they just served and we need to thank them for it,” he said.