How many times have you texted your teen with an important question–and they’re just totally mute? You know they saw it. After all, they’re glued to their phones whenever you’re with them in person. So you sit and panic. You pace the house. You text them again. It’s a vicious cycle.

Most of the time, your teen hasn’t been kidnapped and isn’t smoking cigarettes and isn’t doing anything that your irrational part of your brain is imagining. Chances are they saw your text, but told themselves they’d respond after they played a game or texted their other friend…and then completely forgot to text you back.

One dad, Nick Herbert, was super aware of this struggle. His son was constantly ignoring his texts, and he was sick of it.

“My son has an iPhone, but I still can’t get hold of him very easily as it’s always on silent because he is playing games or has been at school and forgotten to turn the sound back on,” he explained. “There didn’t seem to be a solution out there that allowed me to send a message to him, that would override the silent function, appear over whatever he was doing and tell me when he had seen it.”

So Nick decided to do something about it. And by something, we mean he created an app to solve this common problem. And we have to admit, it’s pretty freaking awesome.

The app is called ReplyASAP and it essentially takes over your phone when you get a message, not allowing you to ignore it or go back to playing some kind of game. It also sounds an alarm, and tells the person who texted when the receiver has seen the message.

Say goodbye to the “sorry, just saw this” texts that you get hours or days after you sent a text! 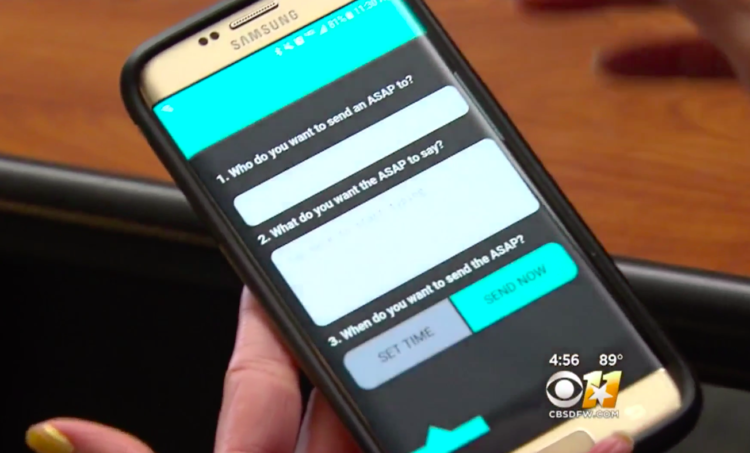 One thing to note: Your teen must voluntarily download this app in order for it to work on their phone. But even though it might be annoying for them when they get this kind of text, Nick recommends explaining it to them in a way that makes sense to them.

“It is key to discuss with the child that they understand the reason for having it. It is not a punishment or a tool for tracking them, nor will it remotely lock [or] freeze their phone,” Nick said. “It is simply a means of allowing them to carry on using their phone however they want, but giving a means of getting [them] an important message when [you] need to.”

“It gives [my son] the freedom to keep his phone on silent, but with the knowledge that I can get a message to him if necessary,” Nick added. “He knows when to use it and when I send him a message on it, it will be important.”

ReplyASAP is only available to download on Android right now, but will be coming to iOs soon.

Genius! To learn more about how the app works, check out the video below!


Do you share the “my-teen-won’t-text-me-back” struggle? What do you think of the concept of this app? Do you think it’s something you’d use, or that your teen would be okay with?