If you are someone who considers yourself to be “into” antiques, then you know that items that some may deem as only “storage-unit-worthy” can actually be worth a large sum of money. That’s why we love to see these appraisals in action. They serve as history lessons AND emotional rollercoasters all rolled into one!

Though the star of today’s story, Ted, a blanket-owner who showed up to the Antiques Roadshow, admits to not knowing “an awful lot about” his piece, he does know that it was first given to famous frontiersman Kit Carson, then passed down to the foster father of his grandfather.

Did you get that? Yeah, us either. Basically, all you need to know about this unique weaving is that, for all intents and purposes, it has served as a family keepsake for years, handed down from generation to generation. It’s like one of the items that many of us keep tucked away in attics and basements that we never give much thought.

The owner is not even too sure about the origins of the piece. Before Donald Ellis, the appraiser, gets into the nitty gritty of weaving’s significance, he asks Ted if he knows who made the item in the first place.

When he responds with a cavalier, “It’s probably a Navajo, I don’t know…” it’s becoming more and more apparent that this is going to be a pretty big shock, especially considering that Ellis says that he “stopped breathing” when he first set eyes on Ted’s blanket. Yep, this is going to be one worth watching!

And, it’s true, when the appraiser begins to tell Ted exactly about what he has on his hands, it looks like he can barely contain his excitement! 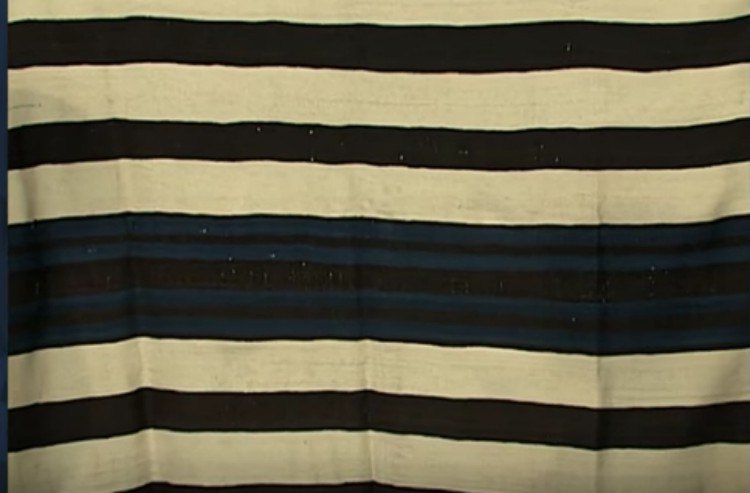 Antiques Roadshow PBS
Ellis explains that the piece is what is known as a “chief’s blanket,” a valuable cultural treasure in and of itself, but this particular one takes the cake; it is called a “Ute First Phase Wearing Blanket,” and it may be one of the first of its kind ever made.

According to the appraiser, the simple design of the blanket is an example of “Navajo weaving in its purest form.” On top of the that, Ellis calls it “the most important thing that has come into the Roadshow” that he’s seen!

So, how does this humble blanket-owner feel about owning a piece of national history? Well, we think the tears running down his face say it all!

To get an idea of exactly how much this rare Navajo blanket is worth today, be sure to click on Antiques Roadshow’s video below. Now, if this doesn’t convince you to hold onto old keepsakes, we don’t know what will. If you need us, we’ll be digging through our basements, taking a closer look at our heirlooms!

What do you think of Ted’s incredible piece of history? Are you a fan of antiquing? Have you ever been surprised by an item that you’ve had appraised? Tell us all about your thoughts and experiences in the comments section below!