Tales of digging up dirt and accidentally finding ancient artifacts is usually fodder for elementary school playgrounds, but this scenario became reality in the Spanish town of Tomares. This past spring, construction workers who were performing routine excavation work were amazed to unearth an unprecedented surprise. They came across 19 ancient storage containers that held a whopping 1,300 POUNDS of ancient Roman Coins! How’s that for an unexpected discovery?

According to The Huffington Post, these coins were found in practically mint condition, with little wear and tear. It’s also believed that these coins were never in circulation in the first place, a fact which further deepens the mystery that surrounds the discovery.

The Guardian reports that Ana Navarro, head of the Archaeological Museum of Seville, estimated the treasure trove as being worth several million euro. Why such a high appraisal? Well, these coins were confirmed to be minted all the way back in the 3rd and 4th centuries. In fact, these coins bear the faces of the ancient emperors Maximian and Constantine.

In response to the distinctive nature of the coins, Navarro was quoted at a news press conference as saying, “It is a unique collection and there are very few similar cases.” Not too shabby of a find considering these coins were uncovered by a construction crew!

The storage vessels in which the coins were found, called amphoras, are considered to be spectacular finds on their own. These ornate jars were generally used as a utilitarian item and date back all the way to the Neolithic Period. Most often, amphoras were used to safely transport wine—a staple beverage of that time.

According to Navarro, these coins were bathed and plated in mostly bronze, but some of the coins were also bathed in a more valuable silver material. 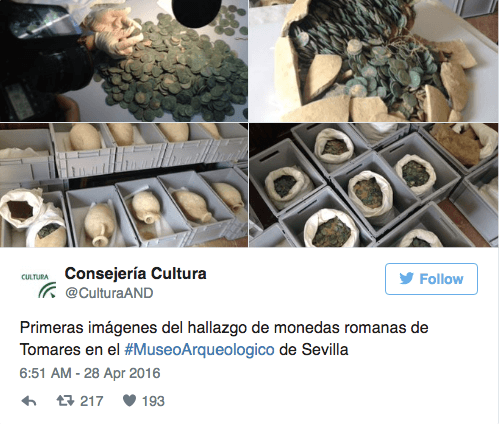 Consejería Cultura Twitter
Navarro was quoted by CNN as saying, “What is incredible is a discovery of this size—there are 19 amphoras, all complete, and I can assure you they can’t be moved by one person alone, because they weigh so much due to the coins inside.”

The Guardian reported that the construction crew, who were mostly working on repairing water pipes, were ordered to suspend all further work in the immediate area. Archaeologists were hoping that this encounter would potentially lead to other extraordinary breakthroughs in the archaeological world.

Spain has long been known to be one of the heavyweights for archaeological sites and discoveries. The country is home to famous ancient areas like Castillo del Niclo, where various items from both the Roman and Bronze Age have been found. One of the most spectacular sites is the Cave of Altamira where visitors can take a look at cave paintings that were originally made between 14,000 and 18,500 years ago.

Have you ever made any incredible or unexpected discoveries? Do you have any cool archaeological findings that you would like to share? Be sure to tell us all about them in the comments below!