Little Boy Takes Package from Neighbor’s House and Drives Away. Then Mom Finds Out What He’s Done.

There’s nothing more satisfying than ordering an item off of Amazon, then having it delivered right to your doorstep in a matter of hours. If you live near one of the company’s shipping centers, you’ve probably experienced this technological miracle. But just because Amazon can place the package on your porch, doesn’t mean it’s going to safely stay there.

You see, these days, petty criminals are casing even the “safest” neighborhoods, looking for the right opportunity to snatch one of those brown boxes from an unsuspecting homeowner’s doorstep. It’s a disturbing reality, especially considering the thieves are seemingly getting younger and younger by the minute.

Take the subject of today’s clip, for instance. Sure, this lead-footed tot may look cute and innocent, but believe us when we say he is anything but! 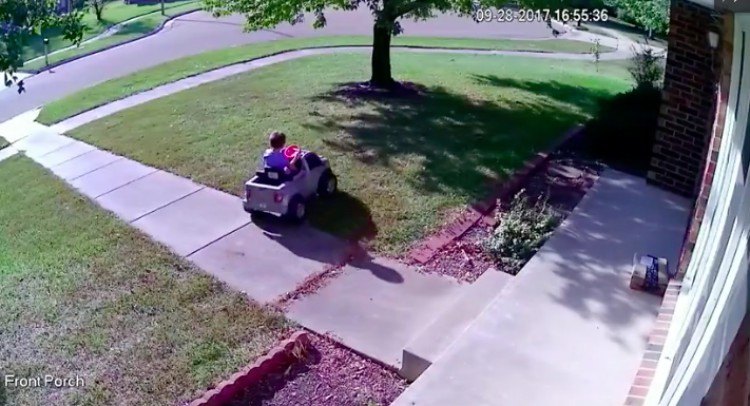 Now, this may come as a shock to you, but this tyke isn’t ACTUALLY a police officer. We know that cop truck that he’s so expertly driving looks like the real thing, but he is just another hardened criminal who has taken it upon himself to steal his neighbor’s freshly-delivered Amazon box.

Surveillance cameras catch the felonious boy committing his first crime—erratic driving—when he completely disregards the rules of the road by driving his truck right onto his neighbor’s lawn. He looks carefree as can be… until his little eyes fix themselves on an item on the porch.

Now, any career criminal would tell you that, unless you want to risk getting caught, you’d best feel out the situation before you commit your offense. Because the youth has no doubt done this sort of thing before, he does another loop to ensure the coast is clear before he goes in for the kill.

Believe it or not, once this lawbreaker puts his mind to nabbing the loot, he doesn’t even look behind his back. In this case, he’s lucky enough to get that heavy rectangular package in the back of his truck without anyone noticing before driving off.

We don’t know if we’d exactly call it the “perfect crime,” especially considering what happens next… 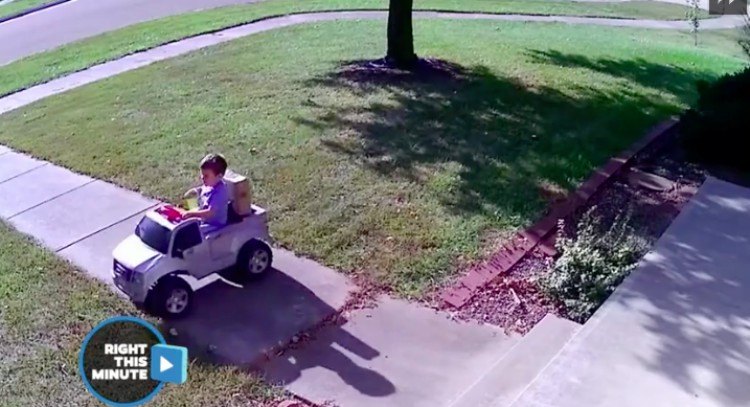 Not soon after gunning it back home, the boy reappears with the box—yep, he unabashedly returns to the scene of the crime, stolen goods in hand. We’ve seen this sort of thing happen before on cop shows, but we didn’t know it was something that fugitives actually do. Talk about antisocial behavior!

We’ll leave the end for you to watch—because it’s just THAT shocking. Spoiler Alert: his mom may have something to do with the package’s return. Dun dun dun!

To see this would-be criminal’s nefarious act, be sure to check out Right This Minute’s video below. Turns out the hosts have a slightly different take on the events than we do. To each his own!

We can’t wait to hear what you think about this tot’s law-breaking. Have you ever had a package stolen from your porch? If so, did you ever find out who did it? Do you think this felon should be busted for his crime?