April Fool’s is a time for the mother of all pranks. If you’re a prank-war enthusiast, you probably look forward to April 1st all year just so you can trick your closest friends and family. Maybe you spend days, weeks or months coming up with a hilarious joke so you can laugh in the expense of someone else.

Well, at least if you’re anything like Maureen Pritchard you definitely did this. This woman literally spent months plotting to trick her husband in honor of April Fool’s Day, and the entire Internet can’t stop laughing about it because of how relatable it is. And you’ll probably think so too if you’ve ever had to hide an Amazon purchase from your husband because you have a Prime problem (guilty myself!).

Maureen saved Amazon boxes from all of the things she ordered from the site over the course of several months. She even got her parents and her sister in on the act and had them save their boxes from their own purchases as well.

Right in time for April Fool’s Day, Maureen finally had enough boxes saved to play the biggest prank of all on her husband. While he was at work, she carefully lined all the empty boxes up on her doorstep as if they were all delivered that day, so that when he got home, he’d think there were dozens of Amazon purchases that just got there today, meaning his wife went a little click-happy (and spend happy!). 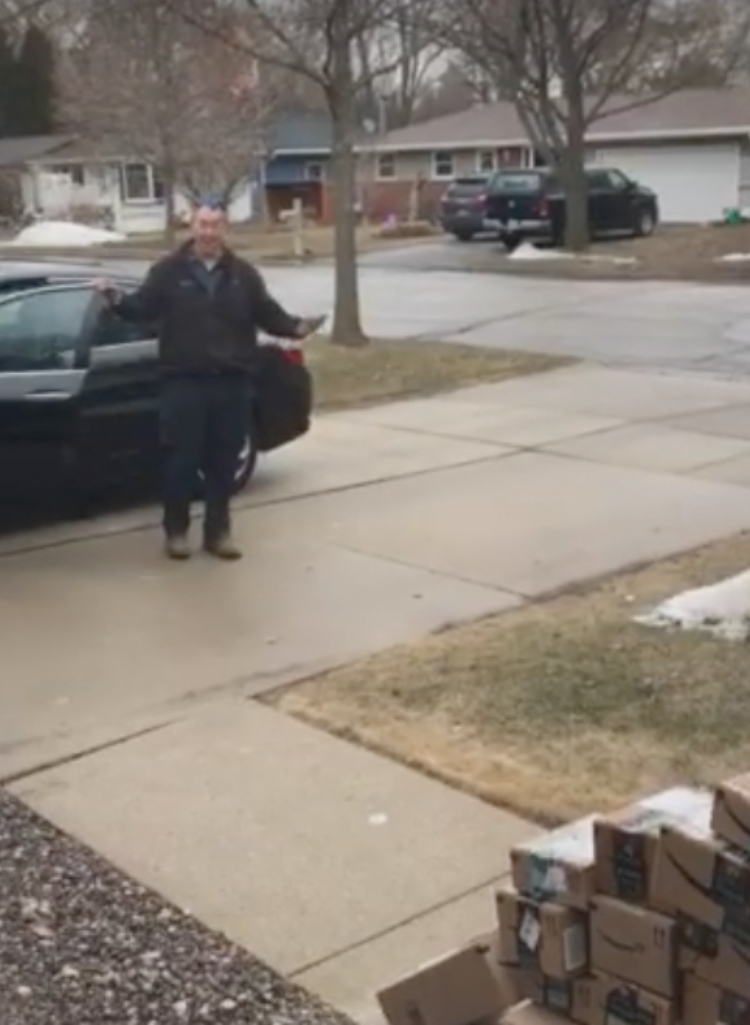 Clearly, her husband, Rob, had no idea what day it was when he got home and pulled up to the driveway with all of the boxes laid out.

When Rob got in the house in Wisconsin, it was obvious he thought there were actual purchases inside all of those boxes. Needless to say he was not exactly thrilled about all the money he realized his wife must’ve spent—at least before he realized it was a joke!

Below is Maureen’s post on Facebook that has since garnered nearly 4,000 likes and thousands of comments from people—mostly wives—praising Maureen for the prank of the century.

“I’ve been planning an April Fool’s joke to play on Rob for MONTHS!! I got him good! I wish I would have continued to record right away when he came in the house,” she wrote on Facebook. “When he saw me recording out the window I thought he realized that it was a joke, but when he came inside he kept asking, ‘What IS all that?!?’ I had to explain that it was 6 months of saved boxes, from us, my parents, and my sister! The second video is his reaction. April Fools! Anyone need any boxes?!? You have no idea how many people slowed down or stopped in front of our house all day today!”

You can check out the videos of Rob’s reaction to the boxes here!

How hilarious is this prank? Would your spouse kill you if you ordered this many packages in one day? Did you pull any April Fool’s pranks this year?