There’s a lot of cool things you should know about Frankie. He’s an actor. He lives in New York City. Oh yeah, and he hasn’t had a haircut or beard trim in over five whole years.

As you can imagine, his hair is incredibly long. When he holds it out to the sides of his he can barely reach the ends with his arm span. And that beard—I mean, you rarely see beards that long unless they’re on Santa Claus. He’s got some serious locks.

The 65-year-old has been in front of a TV screen acting since his high school days. But while he used to play fun roles like a delivery boy, somewhere along the way, as his hair got longer and he got older, he usually only gets roles if they involve some kind of bum or even a “creepy” character nowadays.

“Little by little, I went from being a young character type to this old, creepy type,” Frankie says.

But on his own, he really doesn’t know where to go from here. It’s not like he’s never tried to style his hair! He just hasn’t had any luck in the process.

“My hair is impossible at this point to style because I don’t know what to do—there’s so much of it,” he says. Plus that beard is constantly getting caught in things like zippers. Ouch!

Frankie’s ragged style matches his ragged appearance—aka it doesn’t really do much for him. You can normally find him in some kind of flannel shirt match with a pair of jeans that are “probably not fitted well,” he says.

And when it comes to his social life? He says he doesn’t really have one, and that includes a romantic life—“because well look, would you date this person?” 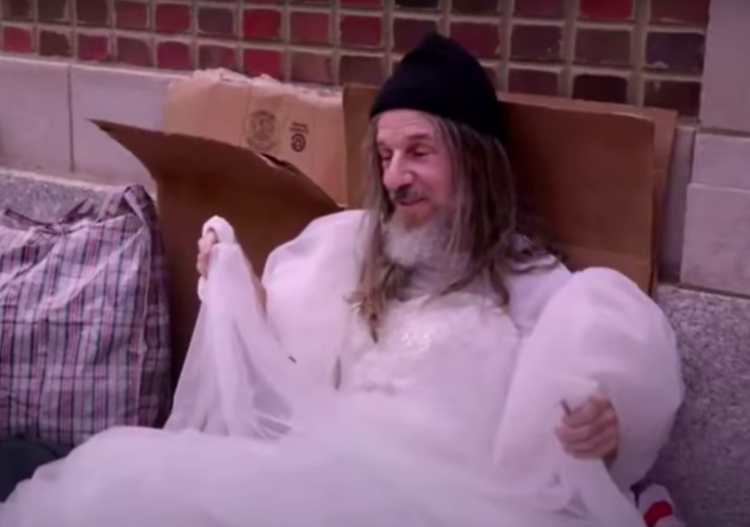 Ready to take his career—and style—to a new level, he got chosen to go on Rachael Ray’s makeover segment, which, if you’ve ever watched it, is always jaw-dropping. A high-end stylist usually gets involved and make -over someone like Frankie. And they don’t get to look at themselves until they’re on stage in front of the audience!

“It’s time to move on—new horizons, see what’s out there, and go for it,” he says.

Rachael Ray called in lifestyle expert and GQ Insider Tommy DiDario to take Frankie from drab to fab. He teamed up with Gretchen from Oscar Blandi for Frankie’s hair while he took care Frankie’s wardrobe. And man, did these two do a good job. We are totally blown away by his new look!

With his chopped, styled hair a new snazzy outfit, as Tommy puts it, George Clooney might have to take a seat next to Frankie! He is looking like one silver fox.

You’ve got to see it for yourself to really believe it’s the same person! Want to see what Frankie looks like now? Check out the big reveal of Frankie’s new look below!

What do you think of this incredible makeover? Would you ever grow your hair out as long as Frankie did? How do you think he looks now?