You Have to See This Heartwarming Airport Proposal

Boyfriend Hugh was waiting in the Dublin airport surrounded by friends and family. They were all technically there to greet Kate, Hugh’s girlfriend, as she returned from her trip to Spain. But little did Kate know that her welcome wagon was there for another purpose: a secret proposal had been planned.

As soon as Kate exited the gate, she was shocked by the crowd of people waiting to greet her. In the center of it all was, of course, Hugh. The two embraced to say hello, and our hearts just melt – they are such an adorable pair!

In the background, Bruno Mars’ song “Marry You” is playing; Hugh had originally planned on greeting his beloved with a choreographed dance that he had come up with himself. However, the crowded Dublin airport meant he had to revert to Plan B: dropping onto one knee, plain and simple.

The two are talking, although over the music and the murmuring of the crowd we can barely hear what they’re saying. We hear Kate exclaiming, “Oh my God!” as she’s clearly shocked by the crowd of friends and family members there to greet her. But otherwise, we can only imagine that Hugh is professing his love for her.

Then, he drops down onto one knee, pulling a white ring box from his pocket. The crowd around them hoots and hollers, and then quickly falls quiet so he can tell Kate that he wants to spend every day of the rest of their lives together. 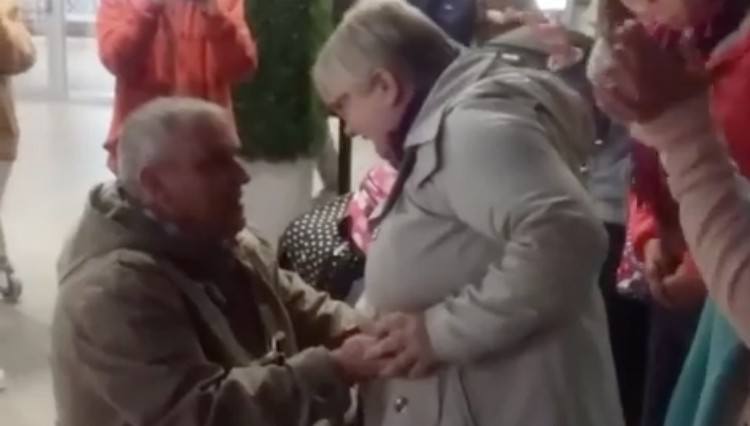 Storyful
Kate immediately says, “Absolutely, yes.” This causes the crowd to burst out into cheers again as the couple quickly kiss and embrace to seal the deal!

Friend and family, all with big smiles on their faces, start to sing the start to the Beatles’ classic, “All You Need is Love,” while the couple continued to hold one another. Our hearts are pretty much about to burst at this point!

This proposal may not have had a lot of bells and whistles to it (like Hugh had originally intended) but we think what happened was so much better. It was a sweet, genuine proposal, where Hugh could tell Kate how he really feels. And surrounded by their loved ones, no less!

The couple may have been in public, surrounded by swarms of people, but you kind of forgot that everyone else was there. It truly just seems like it was only them. And that is what makes for a heartwarming proposal.

What do you think of this adorable airport surprise? Share your thoughts on the proposal in the comments section below.