Airman Surprises His Family by Hiding in a Present

For most families, the Christmas season is about coming together to celebrate the season. But for military families, it’s a much different story. While they can always enjoy spending time with each other, it’ll always feel a little empty without that person who’s away serving their country.

That’s why Christmas time surprise videos are always the best; you know that these families are extra-missing their soldier family member, so you know when you see them appear out of nowhere that they’re granted their families’ Christmas wish.

This soldier surprise, however, might be the best we’ve ever seen.

Airman Nizar Daoud told his family that he was being deployed on a very secret mission, one where he can’t talk to his family for a few weeks. But while he was out of action, the only secret mission he was doing was one to surprise his family.

With the help of his two younger family members, Nizar came up with the perfect plan to fool his family. He was going to hide in a large, wrapped box (like a giant present of sorts) and appear on his grandmother’s front porch on Christmas Day. Then, when they unwrapped him, he would spring out and surprise them all!

Well, at first their plan hit a little bit of a problem; Zar’s aunt and uncle hadn’t arrived yet, and they wouldn’t for another hour. So Zar patiently waited in the backseat of the car until the rest of his family arrived. Eventually, they did, and it was showtime.

The video then cuts to the younger family members (who are in on the surprise) pulling the oversized package inside their grandma’s house. The older family members are shocked by their surprise gift, asking one another what this could possibly be about.

When the package is brought in the living room, the family gathers around the giant present and starts to tear at the wrapping paper. The gift is huge, so it takes a little while to take off the wrapping paper to reveal that these are two large cardboard boxes on top of one another. 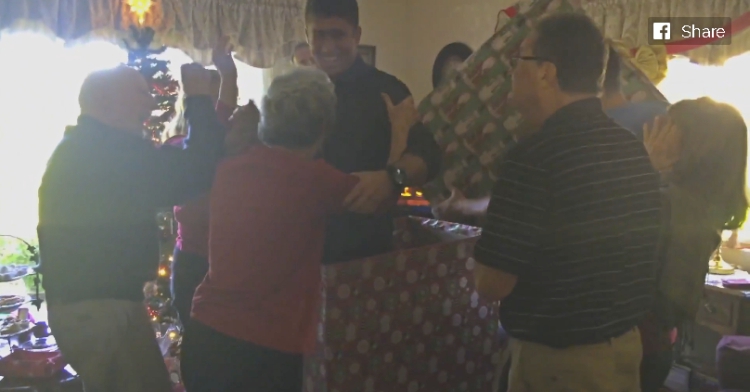 LittleThings
Suddenly, the top box is lifted off by itself and Zar is revealed to be inside the present. The reaction is instantaneous and heartbreaking, as the family surrounding Zar begins to cry, pulling him anxiously from his box so they can embrace him. We’ve never heard so many “Awws!” in our entire life!

Zar makes the rounds, hugging his mom and grandmother, his aunts and uncles, and his cousins. They all look so happy to see Zar, and they can hardly believe that he went through all of this work just to surprise them.

The camera comes in an out of the family’s conversation after the surprise, as the all family members tease the cousins for having been in on the surprise the whole time. When they ask if anyone was suspicious once they saw the giant present, Zar’s aunt said the thought crossed her mind.

“I have to admit, when I saw the giant box I went, ‘Hmm…No, this happens to OTHER families that I see on the Internet!'”

It definitely seems unreal! For minutes afterwards the family can still hardly believe that Zar is actually there sitting with them, and seeing the smiles on their faces couldn’t be a better Christmas gift for all of us.

What do you think of this creative soldier surprise? Share your thoughts in the comments section below.