Let’s face it, no one wants to be stuck near a screaming child on a long flight. Sure, we all may be sympathetic to their discomfort, but it’s safe to say that enjoying a peaceful travel experience is always preferable. Because of this predicament, one trailblazing airline has made the bold decision to create a “child-free zone.” Sound a bit discriminatory? If you think so, you’re not alone!

A budget airline based out of India called IndiGo has become the very first major carrier to actually enforce a rule of this kind. They are now calling the total of eight rows of seats a Quiet Zone, an area where customers are not permitted to purchase a seat for a child under 12.

In a statement, IndiGo explained the parameters for their controversial new rule. “Keeping in mind the comfort and convenience of all passengers, rows one to four and 11 to 14 are to be kept as a quiet zone.”

The main objective behind this idea is to placate business travelers who may have been lodging noise complaints in the past. These clusters of seats are designated as “premium rows” and feature more leg room and amenities than the standard coach seat.

Wait, how is this fair again?!

If you’re a parent, we bet that you are probably fuming right now!

Sure, all of you mommies and daddies out there are probably used to enduring the dirty look or two when you are carting your kid down the narrow aisles of a plane, but this measure does seem to be a bit tone-deaf, especially considering airlines like JetBlue have recently received public support for designating themselves as “family-friendly” airlines.

In an interview with the Hindustan Times, Anshuman Sinha also brings up the fair point that IndiGo themselves may be missing out on some lucrative profits by banning kids from more expensive seats.

She thinks that the policy is “discriminatory” and that “it means that you cannot ask for more leg space while traveling with your children,” something that more than a few parents would surely pay for on a long flight!

Sinha makes another good point by saying that “it’s clear that they [the airline] do not want children to disturb fliers paying extra for these seats. But then why permit children in the nearby rows either?”

It’s true, not every plane is a massive Dreamliner. It’s quite possible that a premium passenger will be bothered by  a crying baby, even if he or she is sitting several rows away!

But, maybe they DO have a point…

In a survey conducted on the topic of family air travel, it was found that 70 percent of passengers agreed with placing restrictions on traveling with children, and 35 percent would actually shell out more dough to not have to listen to a screaming kid during their flight. 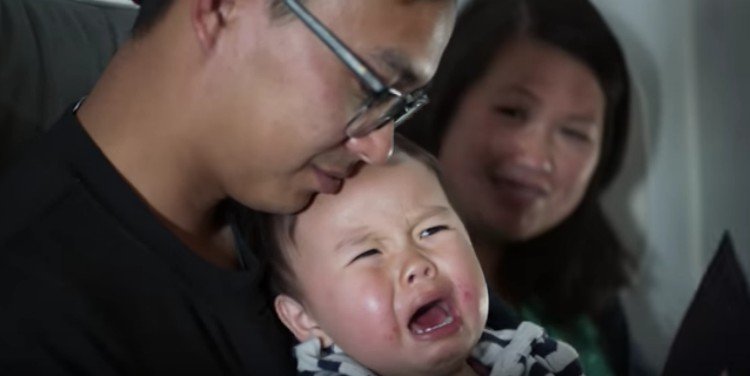 jetblue
Even Rob Law, the inventor of the Trunki, a special suitcase device that was made to support children during air travel told The Mirror that he doesn’t think it’s a “bad call, really.” He added, “It’s not such a bad idea as we do need to cater for all needs. Everyone has different air travel requirements.”

Interestingly, since IndiGo first made this premium change public, the “baby bigoted” airline, as some are calling it, has wiped all mentions of a “quiet zone” from their website. And though it seems that their audacious rule is still in effect, it’s clear that IndiGo wants to keep their decision, well, quiet.

Read even more reactions to this airline’s decision in The Mirror’s article here.

What do you think about IndiGo’s stance on family travel? Have you had a bad experience on a plane with a child? Are you a parent who actually agrees with the airline’s decision? Tell us all about your thoughts and stories in the comments section below!