First class tickets on an airplane are expensive. Adults can’t even usually afford them, so it would definitely seem a little sketchy if you saw two teenage girl passengers seated in those comfy, front-row seats—especially when they didn’t have proper identification or luggage. Oh and they were also totally, completely alone—no parents or guardians in sight.

That’s the train of thought that ticket attendant Denice Miracle had when this exact scenario recently happened aboard her flight.

Two young ladies, ages 15 and 17, boarded her flight from California to New York, and when Denice asked for their tickets, she saw that they were purchased online with names that didn’t match either of them.

“Between the two of them, they had a bunch of small bags,” Miracle said in a statement. “It seemed to me as if they were running away from home. They kept looking at each other in a way that seemed fearful and anxious. I had a gut feeling that something just wasn’t right.”

It was then when Denise decided to call upon authorities from the Sacramento County Sheriff’s Department Airport Bureau to further investigate what was going on. And thank goodness she did. It turns out that the girls were previously chatting online with a man named “Drey” who they met on Instagram.

This “Drey” character was the one who bought them the first-class tickets. He told the girls that he would fly them to New York for the weekend so that they could model and be in a music video—and that he’d pay them $2,000. 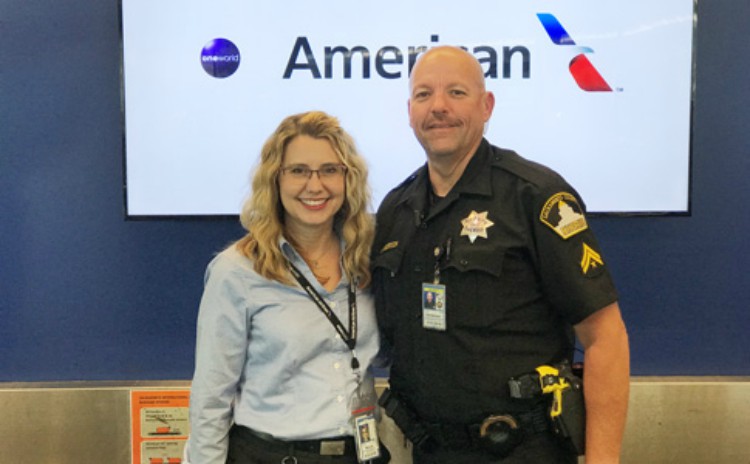 Once the deputies got involved, they immediately tried to contact Drey, but he deleted all of his social media accounts just minutes later.

What’s important is Denice likely saved the girls from a potential human trafficking scheme. She was justifiably praised for her efforts by American Airlines, the airline this incident occurred on.

“I’m proud of Denice and how she put her training into action to save these children,” American Airlines General Manager Aleka Turner said in the statement. “She is a testament to the critical role our frontline team members play each and every day in the operation and the lives of each person they come in contact with.”

While we all want to pat Denice on the back for her heroic efforts, the girls apparently weren’t too happy about having to get off the plane.

“They were somewhat flippant about [it],” Deputy Todd Sanderson told Fox 8. [“They said] ‘No, that can’t be true’—and I said, ‘No, the airline says you have a one-way ticket, and in my belief, you’re going back there not to do the things that you think you were going to be doing.’ And they said, ‘I wouldn’t let anything happen that I didn’t want.’ And I said, ‘Well, you probably wouldn’t have a choice in the matter.'”

Still, the girls’ parents were called and they were sent home safe and sound.

Sometimes teenagers just don’t understand, but we’re sure they’ll appreciate what happened when they’re a little older. It could’ve been a really somber situation had Denice not stepped in.

Be sure to check out the video below for more details on this chilling story: