You Have To See This Incredible Acrobatic Dance Routine

In the middle of an empty dance floor, a tall man is standing in front of a much shorter woman. Both of them are standing incredibly still. Soft, beautiful piano music starts to play over a speaker system, followed by a female voice, singing about a broken relationship. Perfectly in timed with the words, the couple begins to dance; he controls her arms and throws her about, but you can see both of them are perfectly in control as talented dancers, merely acting a part.

At first, it seems like a pretty typical modern dance routine. Their bodies flow effortlessly, with impossible control, and they connect with each other so flawlessly; their moves are synced to perfection and they not only dance with each other, but they assist each other through all of the moves. It’s clear that without one, the other wouldn’t be the same in the routine.

But then something unreal happens.

The music drops, turning into more of an EDM song with a driving beat – and the dancers completely transform. Although their dance was already spectacular, the couple suddenly turns into an acrobatic machine, adding some jaw dropping gymnastics to the performance. 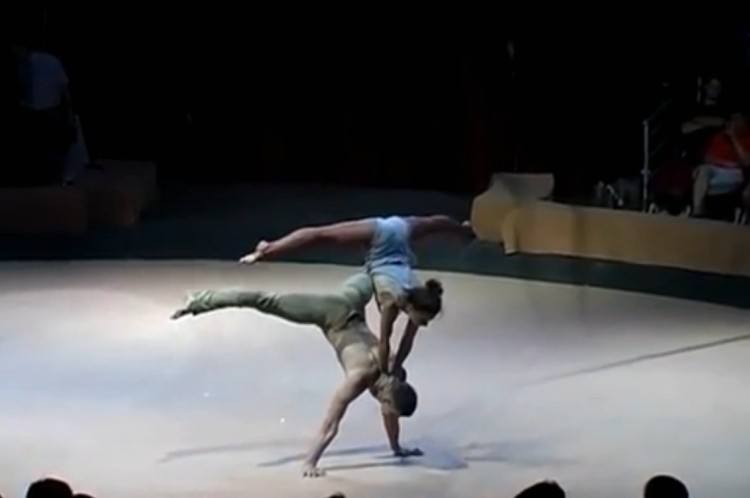 LittleThings
I still cannot believe what I saw in this routine. The two were doing hand stands – ON ONE ANOTHER. The man was lifting and throwing the woman, who flew through the air with impeccable grace, even as she was being thrown and dropped just inches from the floor. (I would have been hysterically nervous this entire time.)

Not only did these performers showcase some incredible strength, grace, and gymnastic skills, but they’re also wonderful dancers as well. As one YouTube comment puts it so perfectly:

“There are no words to explain how incredible this is. But my god it is seriously unbelievable. Some of those lifts are incomprehensible, and these guys are both fantastic dancers in their own right too. Phenomenal.”

Both of them told a story with their bodies, with their faces, and with each other – all while dancing their hearts out and executing some of the most unbelievable stunts. As the comment said, the routine truly is “incomprehensible” at times.

The dancers, Valeriy and Yulia, performed their routine to the song “Heartbeat,” by Nneka. While Valeriy is clearly incredibly strong and talented, it’s the tiny Yulia who we admire most. Despite her size (which is even smaller in comparison to her larger partner), it’s clear Yulia has not only speed and agility but strength on her side, too. Many of the stunts rely solely on Yulia, and she does an amazing job of throwing herself in and out of her partner’s arms, all while staying poised and elegant.

We’re not sure if this was a competition the duo was enlisted in (we’re assuming it was), but whatever it was, they better have won. That’s for sure.

How impressive are these dancers? Have you ever seen something like this before? We certainly have not! Share your thoughts on this incredible routine in the comments section below.