Were you a fan of the movie 9 To 5? The 1980 hit was a super popular comedy starring three lovely ladies—Jane Fonda, Lily Tomlin and Dolly Parton—and if you’re a huge fan of the original, we have amazing news for you…

Get ready for the long-awaited sequel! Even more good news? The original amazing cast, or at least most of them, are come back to star in it.

“My role is as an executive producer, and I’m working with the writers, with Lily, and talking to the writers,” Jane Fonda recently said. “Right now, Dolly, Lily and I are all intending to be in it.”

If you don’t know, the original movie follows the story of three female secretaries (one of which was denied a promotion because she’s a woman) who have a fantasy to get revenge on their antagonizing and sexist boss by abducting him and taking over the business.

Besides being a unique comedy, one of the reasons 9 To 5 was such a hit was because the movie focused so much on chauvinism, misogyny, and harassment in the workplace that many people saw in real life—and still see today. In fact, that’s likely why the sequel is being made in this day and age, especially with the relevance of movements such as #MeToo and Time’s Up.

Fonda actually has some thoughts on that.

“I’m sorry to say the situation is worse today,” Fonda said. “Today a lot of the workforce is hired by an outside company. Who do you talk to if you have a problem? Who do you fight with?” Plus with social media, the Internet, you can be spied on very easily.”

Fonda did say she was hopeful about the future of sexual harassment for women in the workplace.

“I do think sexual harassment will tend to drop,” she said. “Guys are scared.” 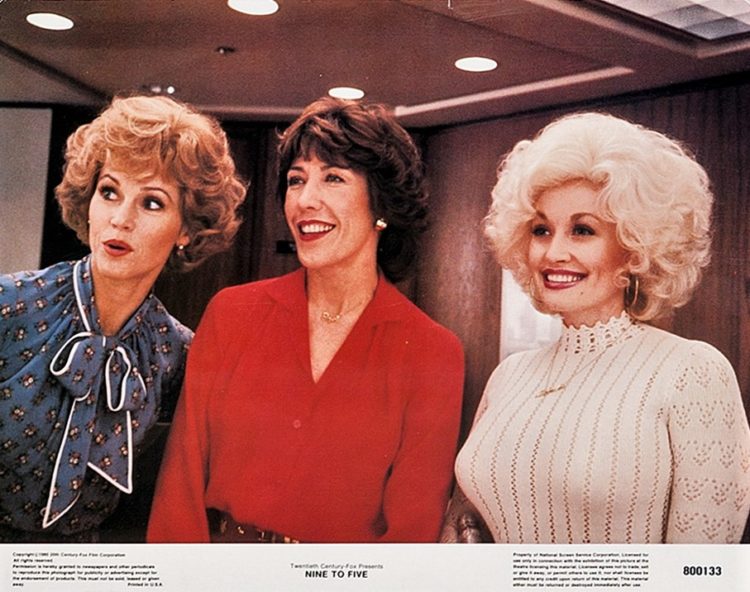 The new 9 To 5 sequel is said to be focusing on similar issues as the original, except more updated and modern—especially topics such as sexual harassment, technology, and the wage gap.

The release date for the sequel hasn’t been released yet and is still in the early stages of development so it may not be out in theaters for a few years. Darn. But, hey, at least it’s happening.

Even 40 years after it’s release date, the original 9 To 5 remains one of the highest-grossing box office comedies of all time. It grossed $103.3 million in 1980, which is equivalent to about $356 million today. There was also a short-lived TV comedy came out of it, plus a Tony-nominated Broadway musical in 2009.

The cutest part about it? Jane, Lily, and Dolly actually all remained friends after all these years, so the sequel really feels like a no-brainer. Jane and Lily star together in the Netflix sitcom Grace and Frankie to this day, and, at the Emmy Awards in 2017, the three women presented the award for best supporting actor in a limited series or movie together.

“Personally, I have been waiting for a 9 to 5 reunion ever since we did the first one,” Fonda said.

So have we, Jane, so have we. We’re so excited! Were you a fan of the original 9 to 5 movie? Will you be seeing the sequel whenever it comes to theaters?