Even if you don’t regularly play the lottery you probably bought a Mega Millions ticket when the Powerball jackpot was at a whopping $1.6 billion recently, one of the highest sums its ever hit (because imagine the ticket was in your store and you didn’t buy it? You’d never forgive yourself!).

That’s just what 87-year-old Earl Livingston did—or at least, wanted to do. Like many others in his town, in hopes of winning big, he ventured out to a local store selling tickets to buy one.

While he thought he was just going to get in and out of the store with his lotto ticket and be done with the day, unfortunately that wasn’t the case.

On the way to the store, that’s when tragedy struck. Earl suffered a pretty bad fall and wound up breaking his hip. He had to be transferred to Jefferson Stratford Hospital in New Jersey for surgery. And he never got his lotto ticket.

Luckily, he had some pretty awesome nurses taking care of him at the hospital. The staff all decided to go in together on several lotto tickets—141 of them. And after hearing what happened to Livingston, they decided to include him in the pool!

How sweet is that? The staff really just wanted him to be able to be involved and finally have some ownership over that ticket, but they didn’t really think they’d win.

Well low and behold, the unexpected happened. While they didn’t win the winning million dollar Powerball, they did win pretty big—one of the tickets they bought was worth one million dollars! 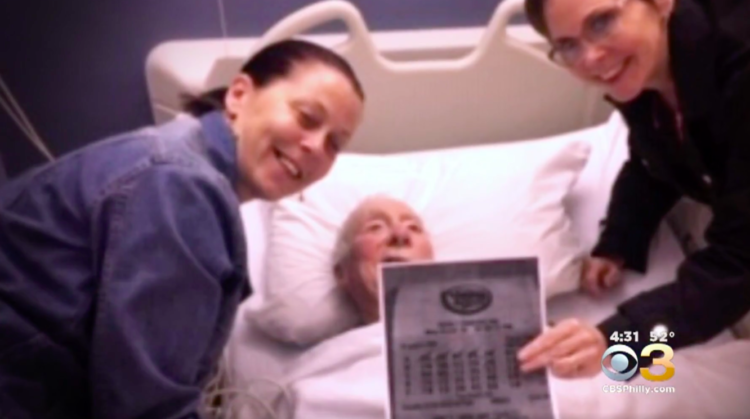 After dividing the money up between all the nurses and Livingston, plus accounting for taxes taken out, each hospital employee went home with about $4,800 each. Not too shabby!

The most important part was how grateful Livingston was for the staff, who said he was overwhelmed with gratitude. “I want to thank everybody,” he said. “I appreciate very much and God bless you and have a happy, happy long life!”

It just goes to show how everything happens for a reason. Sometimes opportunities are missed so that you can get others. Yes, Livingston broke his hip, but if it weren’t for that downfall, he wouldn’t have won big, even if he did buy that lotto ticket.

His family felt just as gracious for such an amazing hospital staff. “We’re just overwhelmed and humbled that they did this. They didn’t have to put money in for him. They didn’t have to tell him that he won. They’re just honest good people and it’s just a heart warming story that there are nice people in this world,” said Livingston’s niece, Bobbie Mickle.

For more on what hospital staff, and others who know Livingston had to say about the ironic situation, check out the video below.


What a story! Can you believe Livingston had to break his hip to win big? How generous were these hospital workers? Have you ever been in an ironic situation like this—where it seemed bad at fist but then turned out to be totally worth it?