It seems like tiny houses are on everyone’s minds these days. Just take a look at the list of shows on this topic on HGTV alone, including Tiny House, Big Living, Tiny House Hunters, Tiny House Living, and Tiny House Nation. That adds up to a huge number of tiny houses!

Most of these shows feature people seeking to escape overpriced, overstuffed McMansions and trade them in for something smaller and simpler. But what if tiny houses could be used to solve the even more pressing problems of homelessness and housing insecurity? Worldwide, experts say, more than a billion people don’t have access to safe, affordable housing. Can tiny houses be the answer?

The nonprofit organization New Story thinks so! They teamed up with the construction technology company Icon to turn a truly creative idea into reality. Using a special “Vulcan” 3D printer, they actually came up with a way to print an inexpensive 800 square foot home, in less than 24 hours.

Many tech experts are hailing 3D printers as one of the next big things. Developers say they’ll be able to quickly produce everything from cups to joint replacements. But a house that’s entirely printed? Now that’s what I call innovative.

New Story thinks that by printing lots of these homes, they can help provide secure but inexpensive housing to vulnerable populations around the world. These could be a lifesaver in areas where people are displaced or homeless, or could help quickly rebuild after a natural disaster. Bravo, New Story — problem solving for a good cause!

3D printing isn’t the only creative solution when it comes to housing, however. Take Laotian-German architect and designer Van Bo Le Mentzel’s work, for instance. He designed what’s touted as the world’s smallest home, the “One Square Meter House.” 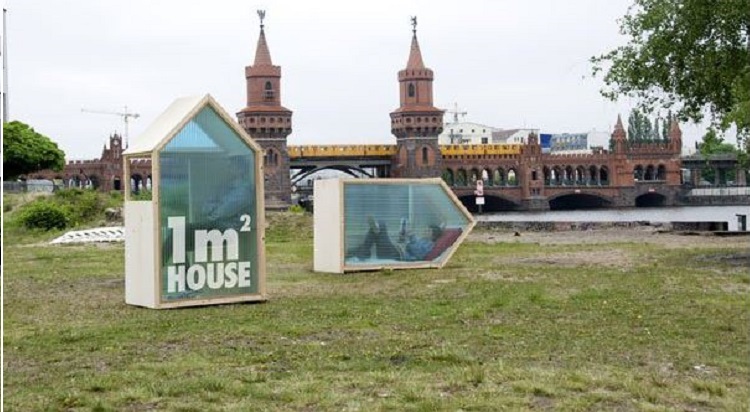 It’s not quite what most people would call a house, but it does provide space to sleep — at least when its turned over on its side! When it’s right-side-up, it can be used as a workspace with a desk or even a small kiosk with a window. Le Mentzel says the One Square Meter House can be built cheaply and quickly, just like the 3D printed home.

A team of students and researchers at the University of Michigan found another approach. They focused on building a larger home out of inexpensive, natural materials. They constructed a 400-square foot building out of 200 bales of straw in a wood frame, covered with adobe.

The home was entirely built by a UM team. Students worked for a month to whip up 65 batches of adobe from locally sourced mud (yum), and used straw from a farm just down the road. Thanks to some solar panels, it’s wired for electricity but completely off the grid!

The total budget for the straw bale house was $20,000 dollars, which included the building materials as well as food and lodging for the students for the month they spend constructing it. Not bad for a complete house!

If you want to be really surprised, check out the video below to find out the price of the 3D printed house. You’ll also learn about New Story’s first plan to bring their houses to the people who really need them. It’s so inspiring!