When you have a small child or baby in your home, it’s only natural to child proof anything that could be a potential hazard—doors, drawers, the oven, you know the drill. But sometimes, danger could be lurking in some of the most unsuspecting places. Like the washing machine.

While the washing machine is something that usually does have a child lock, you don’t quite expect that it’s going to pose any danger. I mean, you do the laundry, the kids are playing upstairs, and all is well. Right?

Low and behold, one Colorado couple, Lindsay and Alan McIver, who have three kids, recently installed a new front load washing machine and dryer in their home. While they didn’t have time to go through the entire manual on the ins and outs of running it yet, they made sure to tell their children that the machines were off limits and they weren’t to play around with them.

One early Tuesday morning, the parents were awoken suddenly by one of their kids hysterically crying—Lindsay had said in her now-viral Facebook post that she couldn’t even understand the words coming out of his mouth because he was crying so hard.

Suddenly, she realized what he was saying, and it was terrifying: “Khloe. In. Washer.”

Even in a just-got-abruptly-woken-up state, Lindsay put two and two together and rushed downstairs to the washing machine to see a true nightmare: Her daughter tumbling inside the washing machine that was now filling up with water. She could tell she was screaming, but she couldn’t hear her.

Adam’s instincts were to tug as hard as he could—so hard he moved the washer from the wall, but it was locked shut. 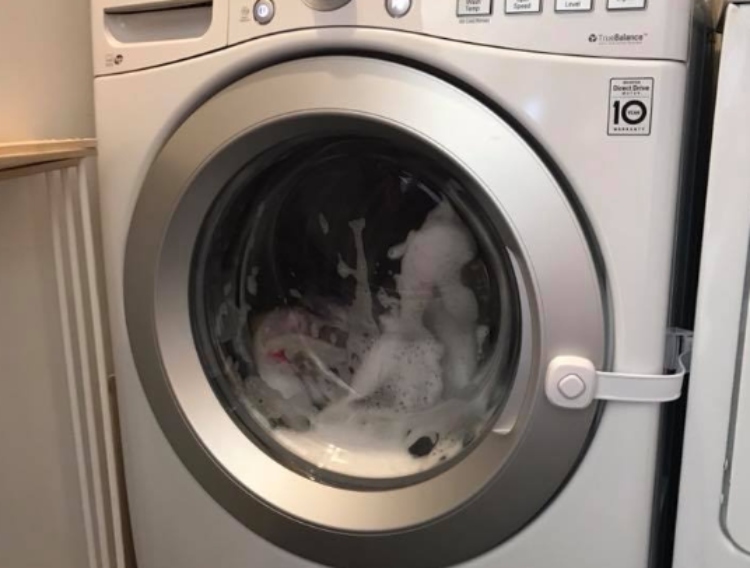 They finally got the washer to stop and get the door opened, and thankfully, Khloe escaped with just a few minor injuries.

“Aside from a couple of small bumps on her head and wet clothes, she was fine,” Lindsay said. “After going through all the ‘what if‘s’ and ‘could have’s’ we know we are very blessed and God had mercy on our sweet daughter.”

Lindsay was, of course, hesitant to post about the traumatic event to the public in fear of mom-shaming. But she realized that letting others know about the potential dangers of the washing machine was more important than getting a few negative comments.

“I want to encourage anybody who has this type of front-loading washing machine and small children, or even grandkids who visit, to lock the door with a child safety lock and always keep the child lock setting on!” Lindsay said.

We’re so glad Lindsay’s daughter was able to come out this terrible incidence relatively unharmed and think Lindsay is very brave for sharing her story to the world.

Did you know that washing machines could be so dangerous? What do you think of Lindsay’s story?