Take a look at “The Expected One,” an 1860 painting from Austrian painter, Ferdinand Georg Waldmüller: it depicts a young woman walking down a dirt road, surrounded by shrubbery, and walking away from a gorgeous landscape of rolling hills. But it’s not her beautiful surroundings or her traditional 19th-century dress that has the internet freaking out.

The strange detail was first noted by Peter Russell, a retired local Glasgow government officer, and his partner. When they were strolling through the Neue Pinakothek, the museum of 18th and 19th-century art in Munich, they noticed something strange about what the young woman in this painting was holding.

Even though it defies all odds, Russell couldn’t help but see an iPhone in the girl’s hands. The way she’s holding the small black box, the light it seems to be casting on her dress, and even how absorbed she seems to be with the object — anyone from our day and age would recognize that distracted walk.

Russell and his partner are certainly not alone. As soon as the photo was posted with this strange observation, the internet promptly exploded with commentary and conspiracy theories. 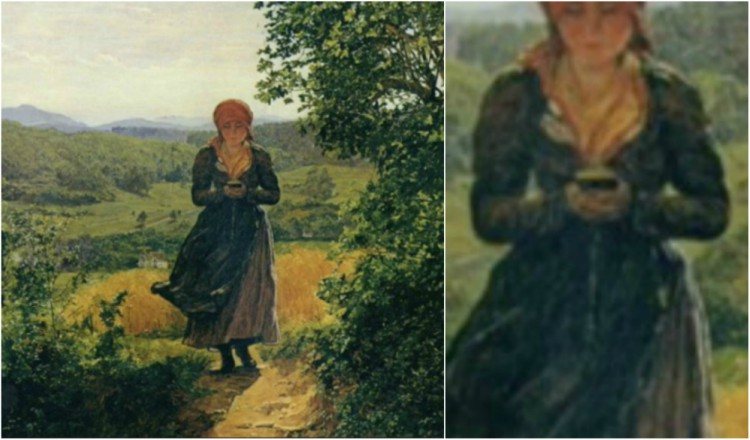 Everyone in the modern world might be well-aware that the first ever iPhone was unveiled in 2007 — but the likeness in this painting from nearly 150 years earlier is just uncanny.

But, of course, the source of the double-take was quickly debunked by experts of the art world:

“The girl in this Waldmüller painting is not playing with her new iPhone X, but is off to church holding a little prayer book in her hands,” Gerald Weinpolter, CEO of the art agency austrian-paintings.at, told Vice writer Brian Anderson.

There might not be some kind of a crazy time warp going on in “The Expected One,” but Russell was struck by something different.

“What strikes me most is how much a change in technology has changed the interpretation of the painting, and in a way has leveraged its entire context,” Russell wrote on his blog about the misconception.

He’s right on the money. What’s strange isn’t that this young woman from the 19th century SEEMS to be holding a 21st-century device, but that 50 —  even 30! — years ago, no one would have assumed what we assume today.

Did you see an iPhone in this painting? Or did you know right away what it was? Make sure to share this story and share your thoughts with us!