Watch This Guy Explain How He Built His Home for $12!

What types of productive things do you think you could do with $12? You won’t believe it, but one young man took this small amount of money and built his dream home! Sure, the structure isn’t exactly what you would call “conventional,” but we think it’s groundbreaking nonetheless. This story may just convince you that living a subsistence lifestyle can give you true happiness.

David’s architect friend originally started the build on this forest home in 2008. The young New Zealander decided to move into the home in 2011, and he has been implementing additions and embellishments to his wilderness den ever since.

The tiny tent home is constructed on a series of wood pallets that act as the base. The structure is reinforced by repurposed bamboo and is covered in tarps for protection against outside elements.

He says that the house was originally made from things that have been found and subsequently re-used. So, that’s how the house only cost $12 to build.

Though David’s home is in a chilly region, he swears by the layered inches of carpeting and bubble wrap that act as insulation for the home. He also has an eco-friendly wood burning stove for those especially chilly days.

Living Big In A Tiny House
The ceiling also helps keep the heat in. The design was originally inspired by a Mongolian yurt, a structure that is meant to stay toasty in cold climates.

Living Big In A Tiny House
As far as the kitchen goes, David cooks outside and in a shared communal kitchen, and insists that he eats well. We do have to say— that steak does look pretty good! 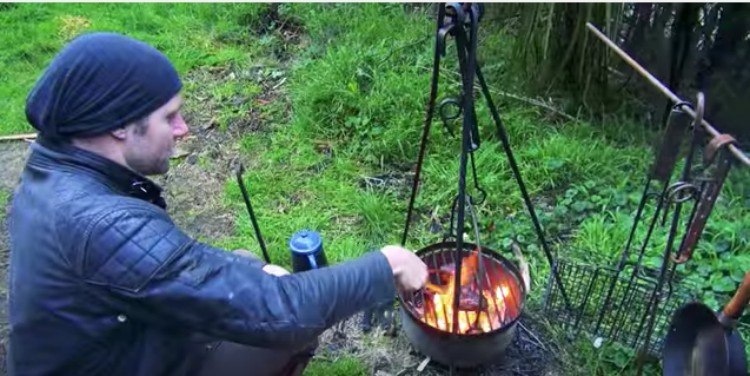 Living Big In A Tiny House
David doesn’t reveal his monthly rent in the video, but he does explain that he pays “a bit of money and [he] helps out a bit on the land.”

Running water and electricity are not features in this tent home, so David must collect rain water and bring it up to the house.

Of the perceived downsides of living off the grid David reveals: “I suppose it takes a special kind of person—it’s not always very easy. You know, like, if you just want to turn the heater on, you can’t—you’ve got to collect firewood, and you’ve got to bring water up the hill.”

The Living Big In A Tiny House host likens David’s home to a bushman’s hut, and we think we agree with him. This house has “Swiss Family Robinson” written all over it!

Living Big In A Tiny House
I think that many of you will have polarizing views on this tiny house— you’ll either love it or hate it. Personally, I’m enamored with this guy’s rustic tiny tent home that’s nestled in the hills.

Watch the video below to get a complete tour of David’s wilderness den.

What do you think of this tiny home? Have you ever lived “off the grid,” and if so, how did you like it? Let us know all about your thoughts and experiences in the comments section below!