A 102-year-old woman recently got arrested in front of her retirement home. The police came, took her cane from her, and put her in the back of the cop cruiser, handcuffs and all. What did she do, you ask? Simple: she called the police and asked. That’s right. In potentially the first time in St. Louis history, this woman called and asked the police to come arrest her.

At 102, Edie Simms has done a lot. She traveled, loved, and lived a full life, thanks in part to her daring bucket list. For decades, Edie had been doing unusual and bold things, just to check off her lifelong list of things to do. But there was one last thing to be done.

The last thing on her lengthy bucket list? To be cuffed and arrested! You’ve got to be a cool person to actually WANT the experience of being arrested., right?

Luckily, the St. Louis Metro police were more than happy to come to Edie’s retirement home, Five Star Senior Center, and help her complete her last bucket list item. They ever handcuffed her – but only after Edie insisted, of course. She was read her rights, put in the back of the cruiser, and brought downtown. This would be a terrifying thought if this wasn’t such an adorable situation!

Technically, Edie wasn’t arrested. She didn’t break the law, not even a tiny rule, to warrant an actual, legal arrest. Literally, she called and explained her predicament, and the police obliged her wish. So she was technically “temporarily detained” at the police station for a bit.

While there, Edie had a great time chatting and taking pictures with the officers. She even imparted a little worldly advice on the journalists of the Today Show and the officers present. 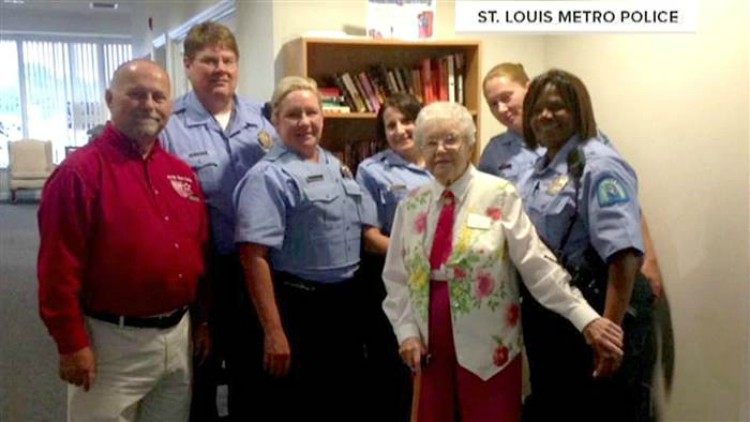 “Keep going, don’t ever stop whatever it is you’re doing and spend some time doing community service,” she said. “Sometimes the person you reach out and touch is the only person that they will talk to in a day.”

These aren’t hollow words; Edie lives her life by helping others, frequently getting involved in the community and donating to many different charities. Before moving to the senior center herself, she donated many of her clothes and personal belongings, and even created clothes from scratch for the residents.

So did Edie enjoy her ride on the wild side? It certainly seemed like she did! It’s safe to assume that Edie is just a lovely woman most of the time, judging by the glowing smile on her face. She has a wise, fun, and kind energy about her that you can sense without even having met her.

But, sadly, after her first ride as an outlaw, Simms decided to swear off a life of crime. She barely made bail (kidding, there was no bail) and managed to get back to the center in time to join the rest of the residents for a game of bingo.

What do you think of this amazing story? Is this going on your bucket list, too? Share your thoughts in the comments section below.