There are some things in life that aren’t necessarily mandatory by law, but are kind of assumed, like a social contract of sorts. For instance, letting someone off an elevator before you get on or being home during the window of time a maintenance person gives you. Your typical individual probably wouldn’t consider breaking these “social contracts”; it’s safe to say they’re ingrained in our systems.

But there is one social contract that people tend to egregiously abuse, and that’s tipping your server at a restaurant.

Tipping your server is something that’s expected here in the States, so much so that the hourly wage of servers is usually extremely low to balance out the amount of tips they’ll make in a shift. Even minimal tipping, which is necessary if perhaps you don’t have a lot of money to spend, is considered acceptable as long as you went out of your way to pay your server.

However, these expectations are not always met, even in their smallest form. Some patrons will still pay for their meal and leave their waiter or waitress with absolutely no tip, which is exactly what happened to Taylar Cordova. 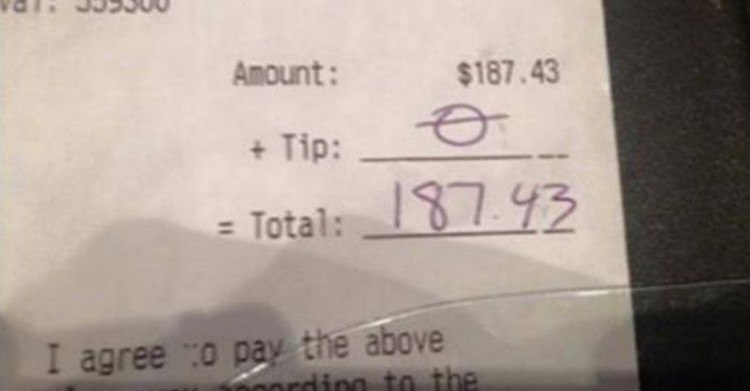 After taking care of a patron, Taylar went to collect their receipt and saw she was left $0 as a tip. Infuriated, she took a picture of the receipt and posted it on social media with a scathing message to the person who stiffed her and anyone like them.

“You are the lowest of the low,” she wrote on Facebook. “Whenever you feel like it’s probably fine to not tip your server, that’s one more bill stacking up because they’re short on money. This is food for the week that our families will go without because you didn’t think it was necessary, even after asking for everything under the sun and receiving it free of charge, mind you. This is one less basic necessity my daughter needs because even TWO more dollars is too much for you. Every decision has a consequence. Servers are paid a base pay of $2-5/hr depending on the employer, so next time you don’t want to tip, regardless of the situation prior to receiving your bill, think about how much you would have to work that week off $2-5/hr to feed your family, not just you. Could you pay your bills based on that pay alone? Could you feed your family AND yourself? Because that’s what happens when you choose to not tip.”

Her points are solid, especially considering the amount of this bill: $187.43. Essentially, the person who decided to drop almost $200 on food deprived her and her child of at least $28. While that number might seem small, it’s much more when considered in the scheme of her argument.

Even if this patron was less-than-satisfied with their service, choosing not to tip at ALL on a bill this large is something we’re glad was called out on social media. What do you think of this stiffed tip? Share your thoughts on Taylar’s Facebook post in the comments section below.