If You Can Crack This Triangle Brain Teaser, You Might Just Be a Genius

Another day, another insanely difficult brain teaser! Yep, we certainly love solving—or attempting to solve, rather—these visual puzzles, so much so that we’ve really done our best to seek out the newest and most demanding ones around.

We found today’s brain teaser on Twitter; it was posted by journalist Jitesh Pillaai, along with the simple question—“Say?”

What we think he is trying to “say” is—how many triangles can you count in the picture?

Now, if you aren’t a seasoned brain teaser pro, then this task might seem like a laughable one to you. Count the triangles? It doesn’t get easier than that! 1, 2, 3…

Sure, brain teasers like this one might look easy to complete to the untrained eye, but anyone who knows anything about the sneaky nature of the visual puzzles is well-aware of the fact that preemptive cockiness is almost always a sign of failure. These puzzles truly make the brain work hard!

So, without further ado, let’s take a full look at this new, viral brain teaser: 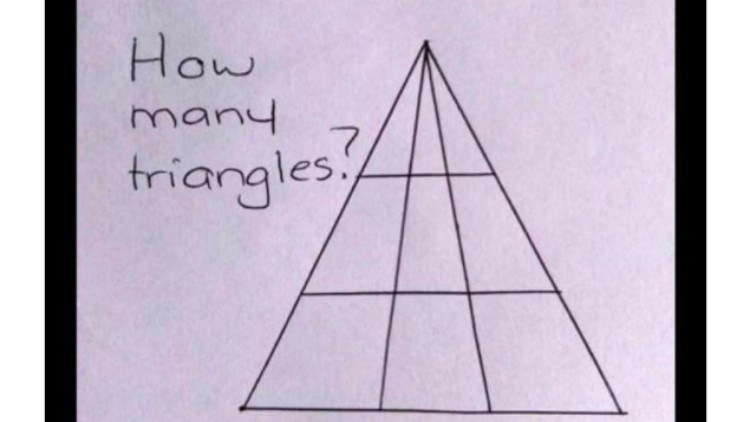 As you can see, the puzzle isn’t necessarily one of the most beautiful ones we’ve come across. If you’ve been following our brain teaser obsession, then you know that we regularly post ones that are filled with colorful and artful elements that are meant to deceive the eyes—and they do a pretty good job doing it!

Having said that, there’s something even more unnerving about being met with a hand-drawn brain teaser like this one. We can’t quite put our finger on what’s so disturbing, but we think it might have something to do with the fact that the puzzle is VERY reminiscent of the ones our calculus professor would hand out for extra credit in college.

Yep, this brain teaser was surely created by some mathematical genius, designed to out the number-challenged folks of the world, like us!

But, although we were, at first, quite intimidated by the puzzle, that doesn’t mean that we didn’t give it the attention that it deserved. As a matter of fact, we think we gave the brain teaser a little TOO much attention!

Thirty minutes after initially getting to work on solving it, our eyes were dry, our head was throbbing, and we had come up with a handful of different conclusions, from 9 triangles to 16 triangles to 42! Yep, we were all over the place, so much so that we eventually gave up and sifted through the comments section until we found the RIGHT answer.

So, how are you doing with this triangular teaser? Do you think you’ve solved it? Have you pulled any hair out? Are you currently hovering over the screen with a significant other, fighting about the number of triangles that are or aren’t there?

Now that you’ve done all of the grunt work, it’s time for you to check that answer for yourself. Just watch the video below to see how many triangles are hiding in the picture!

How many triangles did you count? Did you solve the puzzle right away? Do you have any similar brain teasers that you would like to share?