Brave Toddler Agrees To Sing National Anthem In Front Of Thousands, Then Has Everyone On Their Feet

There are lots of people we admire—from people who work 14-hour shifts and don’t complain about it, to those who know that little actions go a long way.

But we also admire anyone who can get up and sing in front of a crowd. Seriously, it must be so nerve-racking! Whether you’re an accomplished singer pouring your heart out on stage at a concert for the hundredth time, or a little tyke singing Old MacDonald in the talent show, you are our hero.

And speaking of little tykes, we have one incredibly brave one we want to tell you about. But this dude wasn’t singing any wimpy song like Old MacDonald. In fact, he recently became the youngest person to sing the National Anthem in the history of School Day game in Syracuse, NY.

It was at Syracuse’s Carrier Dome—the School Day game vs. Niagara. And before Syracuse dominated Niagara with a final score of 94-45, one little boy dominated the crowd (in the cutest way possible).

At just three years old, Drake Winslow was invited to sing the National Anthem in front of about 6,000 people. And he did so flawlessly before the game started. The crowd went wild, leaping to their feet for a well-deserved standing ovation when he was finished. 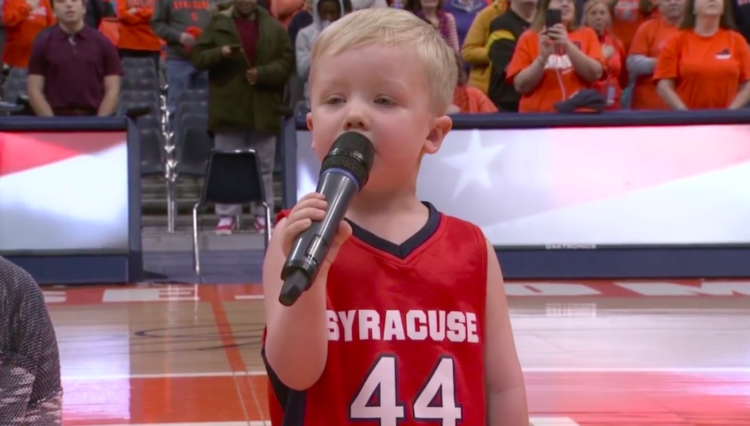 When we were three years old, we were probably cowering behind our mommies in public. We definitely weren’t singing, dancing, or doing anything of talent in front of a crowd of so many! Most little ones would get nervous in a situation like this, but not Drake.

“I just think he’s too little to realize how big of a deal it is,” said Drake’s mother, Chelsea, who stood proudly by his side as he sang. “We just try to stay calm for him and not really talk it up. We don’t ask him if he’s nervous. So then maybe he won’t think of that. I don’t he really knows what nervous is yet.”

Chelsea also explained that Drake has had some practice before, which may help his nerves. He sang the same song for three Auburn Doubledays baseball games in one summer.

Drake learned the classic song simply by watching games on TV, since he loves sports so much. To practice, Drake sings into a toy microphone around his house. He has lots of songs he likes to sing, but the Star Spangled Banner remains one of his favorites.

In fact, he loves singing the song so much much, that after his performance, he kept asking his mom when he could sing again. She always has to remind him that he needs to wait his turn so that others can have a chance.

Drake has been on this earth just three short years, but he sure is braver than most adults are!

To check out Drake’s adorable performance of the National Anthem, watch the video below.

What do you think of Drake’s singing? Do you think he has a singing career ahead of him? Could you ever do this in front of so many people at such a young age?