That Little Pocket in Women’s Underwear Actually Has a Purpose

Ladies, we’ve got a PSA for you. It’s about something that we know you’ve totally been wondering about for quite a while. And truthfully, our mind is blown.

Have you ever noticed a little pocket in the crotch area of your underwear? You know, the one that’s the same color and fabric as your underwear, but it forms a little flap at the part where your vagina sits. Ever wonder about it?

Well, it has a purpose. And no, in case anyone was wondering, it’s not for the purpose of shoving extra toilet paper in case there’s none on the roll next time you’re in the bathroom (not that we’ve ever done that…).

If you don’t know what pocket we’re talking about, head to your underwear drawer right now and take a look at some of your panties. We can almost guarantee that most of the pairs of underwear in there will have a little flap right at the bottom where your, achem, lady parts go.

This pocket—which actually isn’t even a pocket at all—has a name, and it’s called a “gusset.” Some people also refer to it as a “crotch lining,” but for the sake of our appetites, we’re going to keep calling it a gusset.

A gusset is defined as “a triangular or rhomboidal piece of fabric inserted into a seam to add breadth or reduce stress from tight-fitting clothing.”

In other words, it’s a little piece of extra fabric added to underwear to allow your nether region to breathe and protect it from any harm. 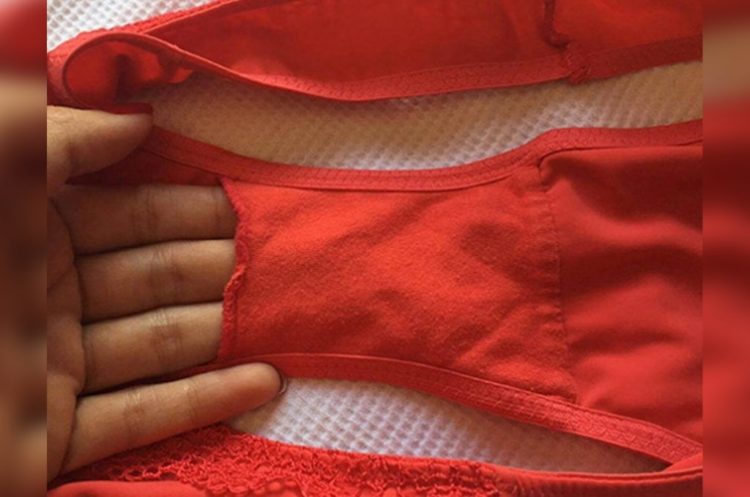 While we think that’s pretty great, this might sound ridiculous to some. A whole piece of extra fabric just to protect your genitals, really?

But it actually makes a lot of sense—a woman’s genitals are by far the most sensitive part of her body. There are so many things that can trigger irritability, aggravation, or inflammation—even something as seemingly small as changing up soap can cause things to go haywire down there.

Besides comfort, the gusset also acts as an inner layer of protection from bacteria or harmful bacterial infections. It essentially makes the underwear more breathable, so it keeps you dry so yeast and unhealthy bacteria has less of an opportunity to overgrow.

All in all, the gusset serves as extra protection from the inside seams of the underwear that could otherwise be kind of harmful to your hoo-hah. We probably don’t even realize how irritated we might be, or how susceptible to a bacteria infection we could be, if manufacturers didn’t include the gusset. So thank you, underwear gods!

Okay, so question: Why does some underwear have a gusset and some don’t? You might notice that typically more sexy, sophisticated underwear won’t have the gusset, and the speculation on that is that it’s possibly because that kind of underwear is only supposed to be worn for shorter periods of time. Eek!

Did you know what that pocket was for in your underwear before this? Did you ever think it was to store something? We’ll never look at our pair of panties the same way again!