Having a baby is supposed to be a joyous occasion, and it often is. But just like with everything involving human behavior, pregnancy comes with unwritten rules of etiquette. So when someone breaks one, you know there’s gonna be an argument over who’s wrong, who’s right, and even whether the rule is legit in the first place.

One of these rules is, Mom gets to hold the baby first. Makes sense, right? I don’t think I need to explain why that is.

But that’s not how it went down for one UK-based mother, who anonymously posted her story on Mumsnet, a parenting and pregnancy-centric website. During her delivery, the anonymous mom had undergone a C-section and was still being sewn up when her mother-in-law went into the operating room and was the first family member to hold the baby. Here’s the full post.

(Side note, they use abbreviations like “DH” for “Dear Husband” and “DD” for “dear daughter,” etc.) 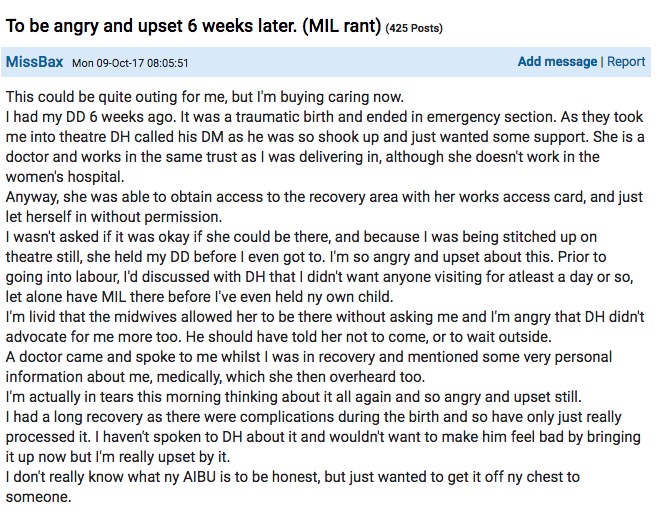 There are a few key pieces of information to consider:

Many people on Mumsnet took Anonymous Mom’s side:

But, some put the onus more on the husband than the mother-in-law, saying he should have been more aware when making the phone call.

A few people were in the “Don’t make a big deal out of it” camp. (Always a helpful thing to say to an Internet stranger who already said they’re mad!)

And one mother-in-law weighed in, with some alternate perspective.

To me, it’s pretty clear-cut: Anonymous Mom set a boundary, Anonymous Mother-In-Law ignored it. Yes, there were mitigating factors like the emergency surgery and Anonymous Dad calling the MIL for support. Still if being the first one to hold your baby is important to you, I’d be pissed about this too!

But what do you think? Is Anonymous Mom right to be upset, or the MIL’s behavior just an unfortunate mistake that you could see yourself making? (Or both!) Let us know in the comments!