If you’re in a happy marriage, congrats! Being happily wed has about a million and one perks.

For one, you always have someone to share your secrets with, to snuggle with, to watch Netflix with. They’re that third arm when you need to both wash and dry the dishes at the same time. There’s always the opportunity to pick off their plate at a restaurant when they made the better order choice than you did…you get our drift. Happy marriages rule.

There is one slightly not-so-great thing about being in a good marriage, however. Science says that happy couples are more prone to putting on a few extra pounds.

A married woman can gain, on average, 24 pounds during the first five or six years of being married, according to the findings from a study published in the North American Association for the Study of Obesity.

Men aren’t off the hook either—the same study found that men gained weight in even more instances than females: during the transition from being single to being in a relationship, as well as when they lived with their significant other for more than two years—those men were twice as likely to gain more than 25 pounds than men who did not cohabitate. 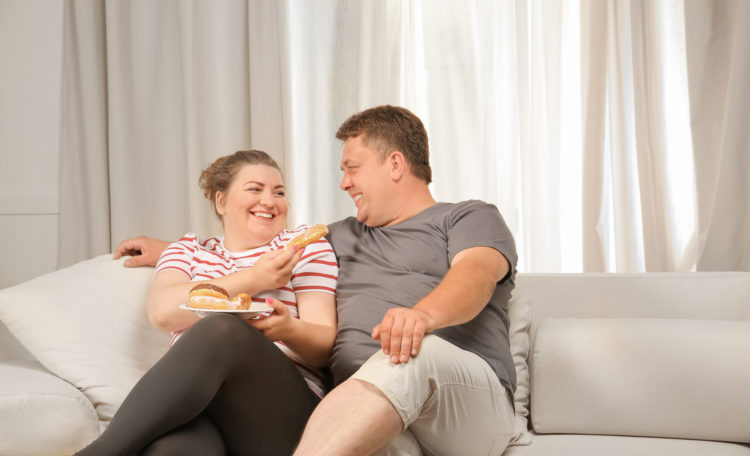 One study looked into why it might be that happy couples gain some weight. The research, conducted by OnePoll on behalf of Jenny Craig, said that some of the top reasons for the extra pounds on happy couples’ bods can be attributed to dining out, being less active, ordering in more, and drinking at home.

It makes sense—when you’re in a happy marriage, what else do you do but, well, eat and drink?

Additionally, the study found that those in happy marriages feel much less pressure to want to look perfect all the time, and in turn, care less about their weight and more content with being comfortable in their own bodies. So really, it’s a beautiful thing!

In related news, it turns out that if your partner is gaining weight, that could be a reason you are too. A study published in the New England Journal of Medicine showed that if one person in the relationship is getting bigger, the other partner has a 37 percent chance of gaining weight as well.

Good news? As contagious as gaining weight is, so is taking it off. You just need to get into a healthy mindset and routine together.

“We know that close relationships affect the health outcomes of individuals. This data is a clear indicator that couples who support each other in a healthy lifestyle together can reap the benefits of happiness together as well,” said Dr. Pamela Peeke, an assistant clinical professor at the University of Maryland School of Medicine.

So instead of making your routine ordering in every Friday, try having a gym date instead!

Are you in a happy marriage and noticed a little weight gain? What do you think of the results of some of these studies? Did you have any idea that marriage could cause something like that?