Why People Are Hanging Eucalyptus Bundles in Their Showers

In general, taking a shower is one of the most relaxing things we do. Think about it—it’s probably the one time all day we’re not looking at some sort of screen, whether it’s a computer at the office or your newest Snapchats. We’re not working, we’re not talking, we’re barely doing anything at all. It’s just you and the water.

Well, and sometimes some eucalyptus, if you want to get fancy.

It turns out that when you tie a bundle of the green leafy plant to your show head, the steam releases its aroma, which can cause even more relaxation and make your shower even better.

Sure, this isn’t a new phenomenon, but one Reddit user recently threw the idea out there and caused everyone to freak out about the “life hack,” as the user put it. It’s just such an easy, cheap way to amplify your shower experience—plus it totally looks adorable hanging in there!

What’s more, and perhaps the best part of all, is that eucalyptus can help ease upper respiratory symptoms, according to a study published in Evidence-Based Complementary and Alternative Medicine.

So if you’ve got a stuffy nose or sinus inflammation, this tip can definitely benefit you. (Ever notice it’s typically the active ingredient in those over-the-counter chest rubs? Now you know why.)

So where can you find some eucalyptus? Lots of places sell it—whether it’s a florist, plant shop, or even your grocery store. You can buy a whole bundle or even just a few sprigs will do the trick.

Once purchased, tie the stems together with a rubber band, string or even a hair tie (whatever works) and then place them over or tie them to the shower head. You can swivel them off to the side or have them hang over the spout; whatever you’d like. 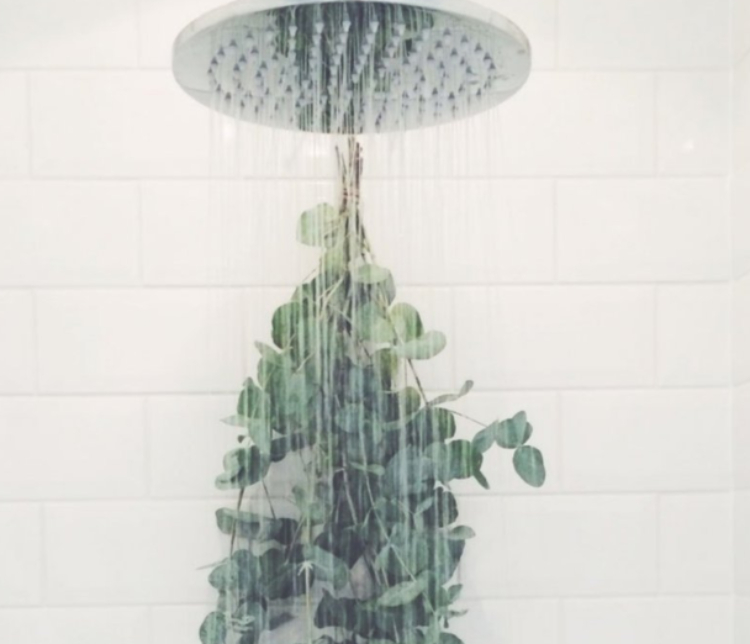 The eucalyptus will last for about a month or two before the scent starts to fade and you’ll need to change them out. Luckily, this plant is wonderfully affordable, averaging only about $3 a bundle most places.

Most people think eucalyptus really adds something nice to your shower: “It smells amazing and invigorating,” someone wrote, which seemed to be the general consensus.

Though we definitely think you should take a hint from this guy, who had no idea what hit him: “Quick tip; let you spouse know that you’re doing this. She did this one evening and I take morning showers. You can image my horror when I saw a silhouette of medusa hair on our shower head when I walked into the dark bathroom and being thoroughly confused when I turned the lights on,” he wrote.

Sometimes a nice, long, hot shower is all we need after a stressful day in the office—why not make it even better with a bundle of eucalyptus?

To learn exactly how to tie it up and get it in your shower, check out this video below!

Have you ever put a bundle of eucalyptus in your shower before? What do you think of the smell? Do you have any other hacks to make your shower even more relaxing?