Ex-Wife Nominated Her Former Husband for a Jaw-Dropping Makeover

If you are a longtime reader, then you know that we love all things makeover; there’s just something so special about witnessing a guy or gal go from drab to fab! And though we’ve seen transformations that are tied to plenty of unique situations, we have to admit that we’ve never witnessed a makeover quite like the one we are going to show you today.

Like most guys out there, Ian would never come out and say that he needed a new look. So, the single dad of two got the push that he needed from a completely unexpected source—his ex-wife!

You see, Ian’s former spouse, Karen, is a fan of the Rachael Ray Show, a program known for delivering some of the most impressive transformations around. Because she’s a great gal, Karen decided that it would be a good idea to nominate someone in her life who needed a makeover the most, despite the fact that said person is her ex.

Hey, we don’t totally get it, but we respect it. Good looking out, Karen!

Before Kyan Douglas, the resident beauty guru at the show gets started on the makeover, Rachael makes a remark about this makeoveree’s luscious locks. “I know about 150 men, just personally, that would kill for that hair!” the host gushes. She’s absolutely right—we hope the stylist spares at least a few inches of his mane.

Luckily, it seems that Kyan has made some careful considerations before diving right into this one. “The plan was to, sort of, consider who he was, especially in the way that he dressed,” the stylist affirms. Good for him! We completely agree that a successful makeover has everything to do with respecting the client’s personal style.

Because Ian is a “big and tall guy,” as Kyan puts it, the stylist has decided to focus on giving the dad a structured look. To achieve this, he has dressed his client in dark denim, sturdy hiking boots, and a military green jacket.

Now, before we move on, we would be remiss if we didn’t take a moment to talk about Ian’s new cut. Kyan has stayed true to his word and kept his client’s locks front and center, but he has also found quite the clever cut to accentuate his hair’s natural fullness. The overall look seems to really fit Ian well—we have to say that we are very impressed.

But, we aren’t the only ones shocked by the fabulous results of Ian’s makeover. His sons and ex-wife are equally dumbfounded… 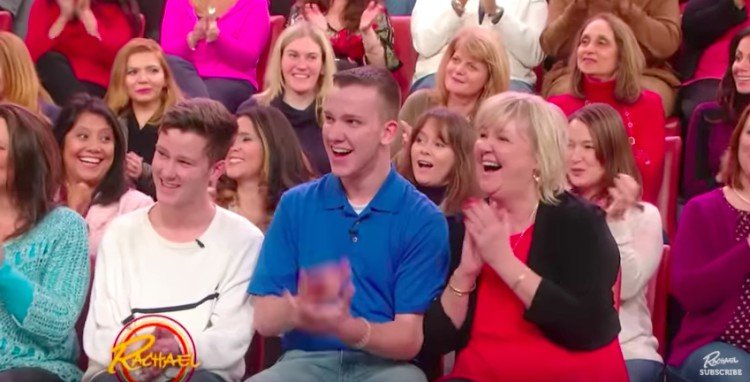 Talk about a reaction! To see this handsome guy get the makeover that he deserves, watch the video from the Rachael Ray Show below. We think this ex-wife may just be rethinking that whole divorce thing!

We’d love to hear your thoughts! What do you think of Ian’s new, hip style? If you were his stylist, would you have done anything differently? Have you ever received a full makeover before?