It pains me to say it, but I think that we can all agree that the goldfish is not exactly the most desirable pet to have around. Sure, the fish can be cool to look at every once in a while, but, after a day or two, most people move on and forget that the little thing is still swimming around in that neglected fish bowl in the corner.

Nevertheless, we think that these often forgotten swimmers just don’t get the respect that they deserve, especially considering how impressive they can end up being if given the chance to flourish. Case in point: These two goldfish that ended up becoming quite the catches when left to their own devices. 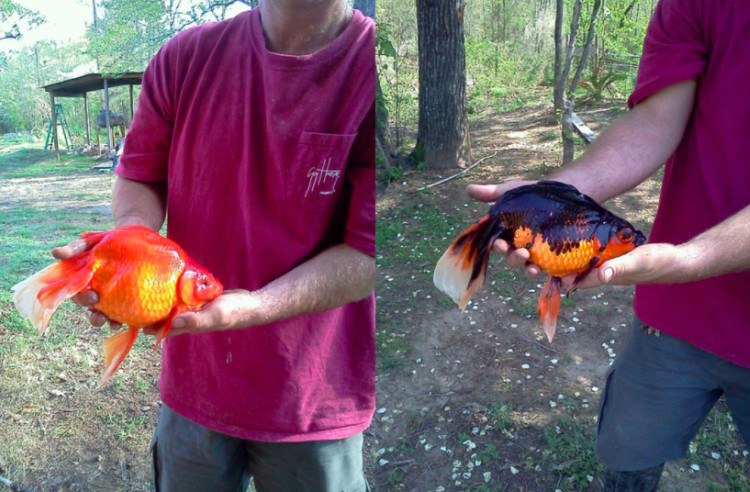 TobiDaDog via Reddit
No, that isn’t some silly Photoshop magic— these ordinary goldfish really got that big!

One Reddit user, who calls himself TobiDaDog, recently posted the odd tale behind these incredible shots.

Apparently, just a few years ago, TobiDaDog’s mother decided to surprise his dad with two goldfish that she had purchased at her local Walmart—you know, a couple of those little “feeder fish”.

She then threw them into the farm pond and, as with all goldfish-related tales, forgot about them. The family never saw the elusive pair again until just last week when the pond was getting drained. It was then that these massive guys re-appeared and shocked everyone!

How did they get so big?!

We were surprised to hear that goldfish could actually get this big and live this long because, in our experience, the pets tend to die off pretty quickly when placed in home aquariums.

As it turns out, the fish can actually live for an impressive 40 YEARS, and can even grow as long as 18 inches. In fact, in 2013, a 15-inch-long 3-pounder was hooked in Lake St. Clair, near Detroit!

Now, this is not some sort of “superfish”. These particular goldfish are actually lucky ones who had been upgraded to a large enough space early on in their lives. You see, we have a really backwards tradition of keeping goldfish in aquariums that are MUCH too small for them. This doesn’t just stunt their growth and development; it actually kills them.

So, if you want to make sure that your fish friend ends up living a long, happy life, you need to give your young goldfish at least 15 gallons of water in a 70- inch tank. And, as you’ve probably already guessed, a fish bowl is definitely not suitable for this species.

Even though these fish sure can get pretty big when released into a pond, it is not recommended that you actually throw any of the little guys in there, as their presence can cause turbidity and disease in the water.

We bet you now have a newfound respect for goldfish, right? Next time you get the itch to pick one of these fellas out at your local Walmart or pet store, be sure to give it the room it needs so that it can grow into the truly impressive pet that it is!

What do you think of these farm pond goldfish? Have you ever raised one that has lived a very long time? Do you have any home aquarium tips? Tell us all about your thoughts and experiences in the comments section below!