When you share a home with another person – whether it’s just you and your spouse, a whole house-load of roommates, or a family filled with rambunctious children – silly little conflicts are part of the package. Most of those small fights we’re super-familiar with: how high or low to set the thermostat; which way to hang the toilet paper; which television shows to record and which ones to watch live. Some of them can have definitive answers (toilet paper should hang over, thanks), but pretty much all of them can be solved with mature compromise. So it’s always surprising to us to not only learn about a new debate, but find one that just might have an answer that’s really “right.” But that’s what happened when we stumbled upon this article from NBC News which seeks to discover the answer to an apparently-eternal question: should you put utensils, specifically pointy knives and forks, in the dishwasher pointing up, or down? 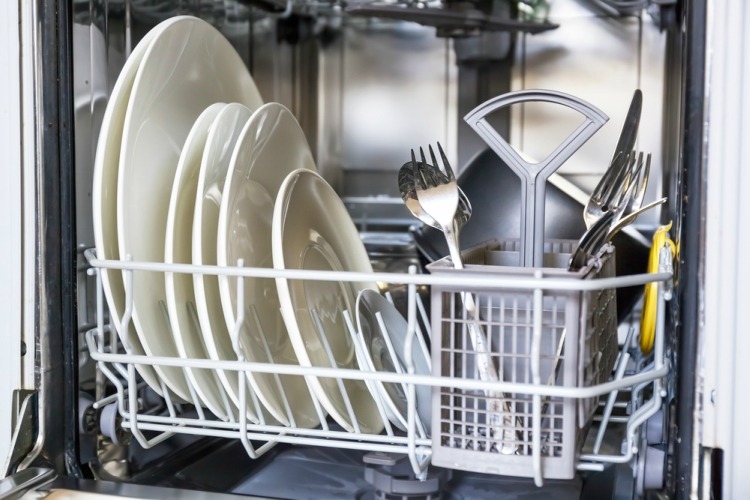 We can hear some of you shouting the answer from here! Like a lot of things, the way one loads the dishwasher gets deeply ingrained the older we get, and a lot of us feel very strongly about it. (Anybody who’s ever opened the dishwasher after her spouse has loaded it and rearranged the dishes knows exactly what we mean.) For the utensil debate, there are pretty strong arguments on both sides. (An ongoing Houzz poll shows that most of the population is split 50-50 on it.) The pro-point-side-up side argues that it’s the best way to make sure the parts of the knives and forks we actually use get hit with the water pressure. The pro-point-side-down side counters that having sharp knives and pointy fork prongs facing up is just an invitation to poke, scratch, and even cut yourself when you reach into the dishwasher. So which side is right?

Well, like anything, it depends on who you ask. If you ask, say, my parents, you load them pointy-side-up to make sure they get cleaned thoroughly, and if you poke yourself or get bloody knuckles, it’s your own fault for not looking when you open the dishwasher. We don’t really expect you to take their word for it, though, so we did a little research. Here’s what we found. 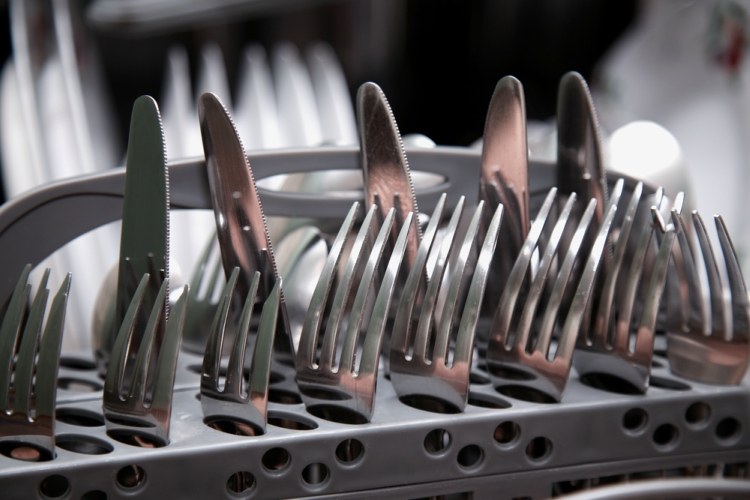 Like most of us, the experts are pretty split. Start Cooking, WikiHow and ABC News all argue for points facing up, arguing that a) many washers have utensil slots that won’t even allow you to put them in any other way and b) it provides more of a guarantee that they’ll be washed. (WikiHow also points out that super-sharp knives should actually be hand-washed, because the dishwasher can dull them.)

On the “points-down” side, we actually find most dishwasher manufacturers. As NBC News reports:

That advice is echoed on GE’s website, which says that we should:

While we suspect that the dishwasher manufacturers are also worried about liability, the point – no pun intended – stands that it is safest to put anything sharp facing down and away from you. That, of course, leaves us with the popular argument that they won’t get clean, and can often leave to “nesting,” where utensils get stuck together and don’t get clean as a result.

So with the general populace and experts in disagreement, is there an actual answer? For that, we turn to our favorite experts— Good Housekeeping, and Martha Stewart, who are both in agreement:

Do BOTH. The best way to load your utensils in the dishwasher is to mix and match points up and down!

Most importantly, this method prevents nestling, so your utensils will always come out clean, and the mix-and-match of spoons, forks and knives in all the compartments should give you enough pause enough that you don’t blindly poke yourself or cause injury. If you really can’t make yourself mix, you have to choose your priority. If it’s safety, or if you have a house full of young children, put the points in down. If it’s cleanliness, points up.

So after all that, the answer is simple: compromise. Sometimes, it really is that easy.

Where do you fall in the dishwasher debate? Do you have a strong opinion, or are you baffled that people care this much? What method do you prefer? Any safety or cleanliness tips to share?