Soda is full of sugar. That’s no secret, especially in this day and age where people are very aware of how much sugar they’re consuming. We all know that there’s a war on sugary items, particularly soda, and there are warnings everywhere we turn to cut down our intake of this sweetest substance for our health.

And once we see what sugar can do to our bodies, this is a warning most of us are happy to heed. Sugar intake doesn’t just encourage diseases like diabetes, cause skin problems, and result in weight gain, but it’s notoriously damaging to your teeth.

But we had no idea just what a bottle of sugary soda was truly capable of until now.

When YouTuber DaveHax saw his 6-year-old nephew had lost one of his front teeth, he seized the opportunity of the lost tooth to try a little experiment. He decided he wanted to see what would happen if he left the little tooth to soak in a bottle of Coca Cola for a week.

Needless to say, it was disgusting. When the tooth resurfaced after seven days, it was a grey-brown, barely retaining any of its original white color. The top of the tooth (the opening) was also softened and decayed; watching him flap that around with a toothpick was straight-up nauseating. 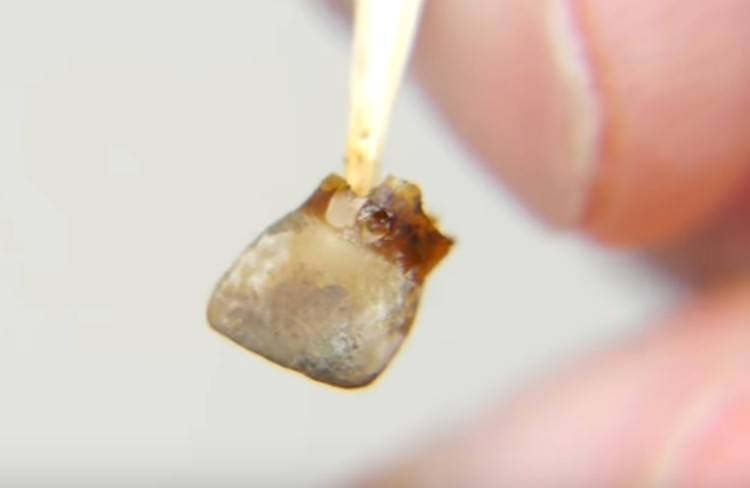 But DaveHax was nowhere near finished with his clever experiment. He told his viewers he was going to put the tooth back in a bottle of Coke but this time for a month. We were excited but terrified, disgusted but intrigued, and totally ready to see the final fate of this poor tooth.

At the end of the month, Dave peeks into the soda bottle, which due to the dark nature of the drink is black and difficult to see through. Over a cup, Dave strained the soda through, waiting with a sieve to catch the transformed tooth.

We’re not going to give away the big reveal — truthfully, you need to watch the DaveHax video below to see just how bad this tooth is after its month-long bath. But let us tell you, it’s just as disgusting as you’re most likely imagining.

And don’t worry, you don’t just see the tooth at one or two angles. Dave takes the time to prop up the tooth on a little stick and rotate the (formerly) pearly white so that you can see the effect of the soda from every angle.

Fair warning: it’s gross, but you don’t want to miss it.

As Dave notes, this is in no way an example of what happens to your teeth if you drink Cola a lot. It was simply a fun experiment to see what would happen to a tooth that took a long soak in some soda. However, this will definitely have us questioning that Coke with lunch, if we’re being honest!

What do you think of this experiment? Did it gross you out or fascinate you? Share your thoughts in the comments section below.