Man Saws Off Thumb, Then Surgeons Attach His Toe As A Replacement

We don’t know about you, but sometimes doing something as simple as chopping an onion can be a little scary. With a knife that close to our fingers, we’re lucky they still remain intact on our hands!

That wasn’t the case for Aiden Adkins. Though he wasn’t chopping onions, he was simply making his girlfriend at the time a gift when the unthinkable happened—he sawed off his thumb.

Surprisingly, he didn’t know what had happened right away. He saw something fly across the room, and for a moment, he thought it was just a wood piece. And while he claims losing his thumb didn’t hurt, he soon realized that the piece that flew was, in fact, not a piece of wood, but his own body part.

As if this wasn’t already pretty strange, the weirdest part of all is that Aiden and his family looked everywhere for the thumb so that he could get it reattached to his hand, but it was nowhere to be found.

And so for several months, Aiden actually went along with his life without his left thumb. But for someone who works in taxidermy and who enjoys target practice on a daily basis, he knew that he should probably do something to mend the situation, if not for now, for the long run.

A few months later, Aiden decided to undergo a procedure where doctors would remove one of his toes and use it to replace his thumb. He figured he’d rather have five fingers than five toes! 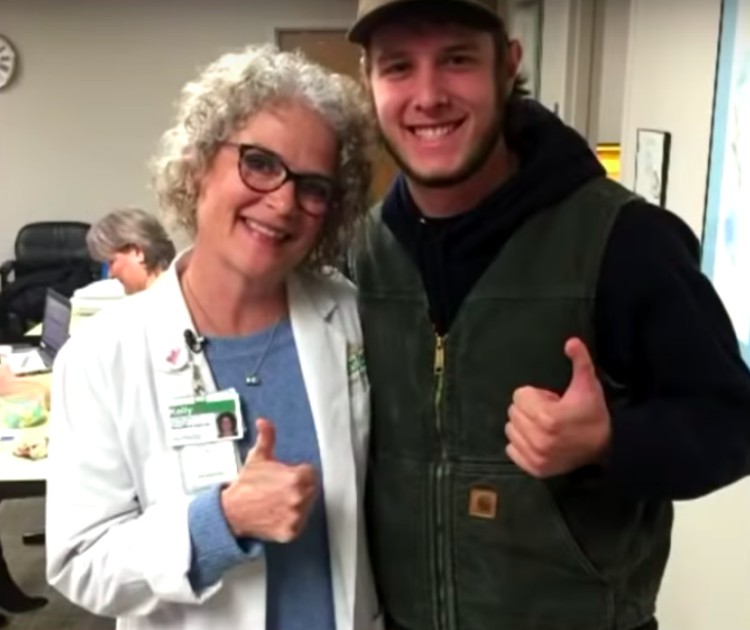 It’s called a toe-to-thumb transfer, and it worked out great for Aiden. During the surgery, doctors removed his index toe from his left foot, which was a perfect match to be reconstructed into his left toe. They then reattached it to where his thumb would’ve gone and voila! He had his full hand back.

Of course, once the surgery was over, Aiden did have to attend hand therapy for a few months in order to build strength and fluid movement. But even that seemed to work out great for him, too, gaining more strength every day.

“His thumb does bend and straighten pretty well,” said Kelly Nye, an occupational therapist at Mary Free Bed Rehabilitation Hospital’s Hand Therapy Program. “That’s the most motion I’ve ever seen out of a toe-to-thumb transfer.”

Aiden is now able to enjoy all the activities he once did and lives a completely normal life, toe-thumb and all.

Truthfully, the thumb does look pretty natural, at least from far away. (Just don’t get too close!) You’ve really got to see it to believe it.

To see Aiden with his new thumb made from his toe, and to hear more on his crazy story, check out the video below.

Do you know anyone who has experienced a toe-to-thumb transfer before? Did you know this was something that was even possible? Which would you rather have: Four toes and give fingers, or four fingers and five toes? What do you think of Aiden’s new thumb?