This 21-Year-Old is the Youngest Person in the U.S. to Get a Successful Face Transplant

Katie Stubblefield’s story has a happy ending, but it didn’t start that way. Back in 2014, when she was just 18 years old, Katie attempted to take her own life after going through a heart-wrenching break up as well as a few other health issues. A day no one in her family will ever forget, she took her brother’s rifle and shot herself in the face.

She survived, but her facial construction did not. Parts of her nose, mouth, sinuses, and bones in her face were lost after the incident. She still had her eyes, but they were damaged, and she couldn’t see as well as she used to.

The next few years would be a long battle for Katie. She had to go through more than 20 surgeries to help rebuild her face, not to mention countless physical therapy sessions to help her regain muscle control. Finally, she and her parents determined that a face transplant would be best.

Katie had to wait over a year before finding a donor, but they finally found Adrea Schneider, who passed after suffering from a drug overdose. On May 4, 2017, a little over three years since the day she shot herself, Katie was admitted to Cleveland Clinic to receive her new face.

At 21 years old, she is the youngest person the country to receive a successful face transplant. Cleveland Clinic alone had done two previous ones, both of whom Katie got to speak with before getting her own surgery.

The transplant was extensive—but successful. During the operation, Katie got a new forehead, upper and lower eyelids, eye sockets, nose, mouth and lips, cheeks, upper jaw, part of the lower jaw, teeth, and facial muscles. About 31 hours later, Katie came out of surgery with a completely new face. 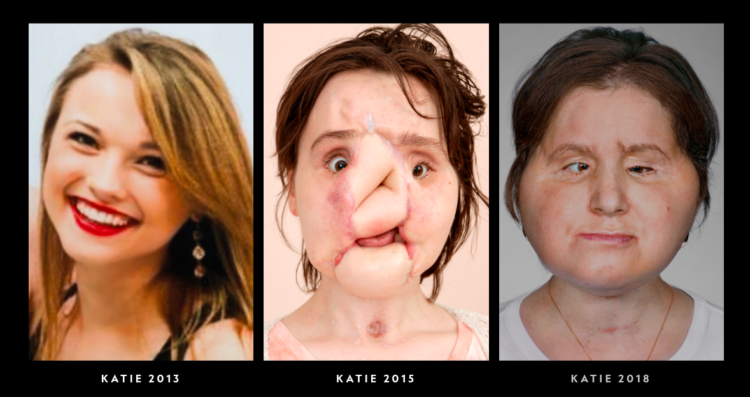 It’s absolutely insane (yet a miracle) what surgeons can do these days! In order to do a face transplant, they first have to consult 3D models of the patient’s and donor’s skulls to try to figure out what part of the donor’s facial bone should be taken as part of the transplanted face. In Katie’s case, they removed the facial bones from Adrea’s face in order to replace the bone that Katie lost.

“I get a second chance at life now,” Katie said before her surgery. “This is like the beginning of another chapter.”

The face transplant was an absolute success. She had to go through three major surgeries afterward, plus extensive rehab treatment, but Katie continues to heal as well as she possibly could, even better than doctors predicted. She will be taking anti-rejection drugs pretty much for the rest of her life, and her parents are hoping to get her eye transplants next.

At such a young age, Katie knows she’s lucky to have a second chance at life and is so grateful for the opportunities she’s had to help rebuild her face. In fact, she’s even hoping to continue her education and go to college to study counseling.

“So many people have helped me; now I want to help other people,” she said.

To check out Katie’s entire story, read her feature cover story of National Geographic titled “The Story of a Face,” and check out this video below.

We’re so impressed with Cleveland Clinic’s work on Katie’s face transplant and so glad for her and her family that she has a second chance at life. What do you think of Katie’s story?