The men and women of the armed forces truly do make so many sacrifices for our country. That is why stories of everyday citizens helping these people in uniform are so important to share. One of these stories in particular is especially heartwarming and inspiring. Just watch what happens when a stranger meets a soldier in an Atlanta airport.

Mr. Glascott of the Unites States Army had been deployed and away for his family for some time. “Seven and a half months I was gone. It was the toughest thing I ever had to do in my life, I’m telling you.” He goes on to explain, “Until you feel it, you don’t know what it’s like.”

At the start of the tale, Glascott tells us about how he was on his way home from Iraq on some R&R. You see, it was his little boy Zachary’s ninth birthday at Great Wolf Lodge, and the soldier wanted to be home to celebrate. So, as he was laying over in an Atlanta airport, he struck up a conversation with the man sitting next to him.

The man introduced himself as Brad, and the two quickly hit it off. Glascott explains that the man was intrigued by his military service, and asked for a mailing address in which he could reach him.

Glascott obliged, but he admittedly “didn’t think nothing [sic] about it.”

When the soldier arrived to greet his wife, Zachary, and young infant son, the emotion was palpable. His wife remembers the moment vividly. “When he walked off the plane—there’s no words to describe . . . Relief that he was safe, and just the joy of seeing my kids look at their dad.”

As the newly re-united family was making their way out of the airport, they were stopped by none other than Brad, who thanked the soldier again for his service.

Later on, when the Glascotts arrived at Great Wolf Lodge, they were met with a message at the check-in desk. The agent told them that they had a note from Brad which read:

Have a good time. From, Atlanta.

The agent then informed the soldier that their vacation had already been paid in full by none other than the fascinated man who he had met on his layover.

The armyman’s wife describes herself as being “speechless” when she first heard about the selfless gesture from the stranger. “For us, it’s just, unreal. I mean, we feel we’re blessed, but for somebody to go out of their way to, you know, fulfill our dreams, to pay for the rest of our trip was awesome.” 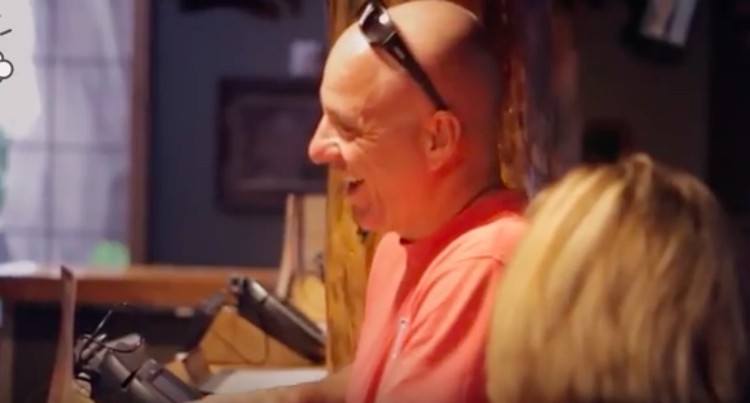 Mr. Glascott echoes his wife’s statement by saying, “It was amazing. It blew my mind—I’m telling you right now—it takes a lot to get me, it got me.”

What an amazingly moving story! It’s great to know that people out there are looking out for one another.

Watch the Glascotts’ account below. We’re sure that you will be inspired to do all that you can for all of the men and women in uniform in this country.

What do you think about the interaction between the soldier and the stranger? Has anyone ever done something selfless for you? Have you done something similar for someone you don’t know? Tell us all about your thoughts and experiences in the comments section below!