Now, don’t get us wrong; one of the main reasons why Starbucks is so popular is because the business is so willing to accommodate highly-customized orders, and we think it’s great! But, on the other hand, these complex orders sure can take up a lot of time for busy customers just trying to pick up their morning coffee. And, let’s not forget those long-suffering baristas–you know, the ones who actually have to make sense of the page-long orders?

Well, luckily, these expert drink-makers are now finding a way to air their grievances on social media (go figure!). You see, it’s now becoming trendy for Starbucks baristas to post pictures of the most ridiculously-long, insanely sweet, and just, plain disgusting-sounding drink orders that they have ever received.

Ashley you have to be trolling us right now… pic.twitter.com/Z0KgF79w0X

So, we don’t really know who “Ashley” is, but we feel oddly compelled to get in touch with her doctor. We don’t know about your thoughts on this drink, but it basically sounds like it should be named “Diabetes in a Cup!” The thing that really gets us is that the sweet tooth actually requests Sweet ‘N Low AND Splenda–that’s after stipulating 30 pumps of sugary syrup, 10 packets of straight sugar, and plenty of other ultra-sweet ingredients.

Well, any step in the right direction is a step. We guess…

Switching gears, not ALL bizarre Starbucks drink orders are overly-complicated. In fact, some of those sticky labels may look normal at first glance, but once you take a closer look…

…you begin to understand the nightmare. This person actually requested 10 PUMPS of raspberry syrup in their Venti White Mocha. Ok, so they might not be an “Ashley,” but they are certainly on their way to becoming one! 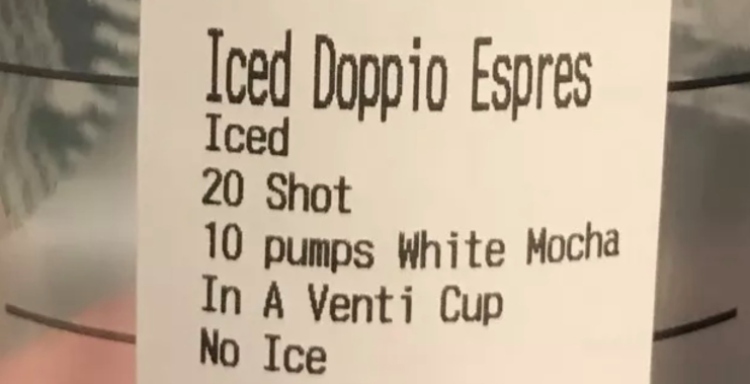 For those of you who don’t speak “Starbucks,” this person requested a whopping 20 espresso shots in their iced drink. That’s along with 10 shots of white mocha syrup. And, that’s not the most perplexing aspect of the order–they actually ordered an iced drink with “no ice.”

We’re really at a loss for words here, but we do have one thing that we would like to say: just because you CAN order whatever you want at Starbucks doesn’t mean you SHOULD. Capiche?