How This Couple Responded to a Waiter’s Super Slow Service

Everyone knows that waiting tables can be a real grind, especially if a restaurant happens to be short-staffed. And though some patrons have the tendency to skimp on tips during times like this, former food service employees can almost always spot an overworked waiter from a mile away!

When Iowa couple Mackenzie and Steven Schultz decided to get away from their twin boys and indulge in a seldom-taken date night, the couple had high hopes for a relaxing, romantic meal. Unfortunately, they ended up at an establishment that was just barely keeping it together.

The restaurant in question, Kazoku Sushi in Cedar Rapids, has a seriously stellar reputation on multiple “foodie” sites, but the business was obviously experiencing a bit of a rough patch on the night that the Schultz family chose to dine.

In Mackenzie’s Facebook post, she’s quite blunt about their poor experience, writing that the service “sucked.” Ouch, right?

She goes on to justify her harsh words by saying that it “took 20 minutes to get water, 40 minutes for an appetizer and over an hour” for the entrée. That sure doesn’t sound like a prime dining experience to us either!

But it’s not until about a quarter of the way through the post that her kind character is revealed. Mackenzie explains that both she and her husband had paid their dues by waiting more than a few tables in their day, so they knew exactly what was happening—the restaurant simply didn’t have enough help that night.

It was very obvious that the issue was being short staffed, not the server. He was running around like crazy and never acted annoyed with any table. At one point we counted he had 12 tables plus the bar. More than any one person could handle!

Now, let’s pause for a moment to discuss just how unfortunate of a scenario this is for a server. He’s obviously working his butt off and doing everything he can to take care of his guests in a timely manner, but, as Mackenzie notes, many diners will end up blaming him, not the management or kitchen, for the delays.

Of course, this thinking can have an adverse effect on his income for the night.

So, instead of making a fuss about the slow service, MacKenzie and Steven did something a bit more unexpected—they rewarded the waiter with a seriously generous tip. The sweet couple even left him with an inspiring message. How cool are they?! 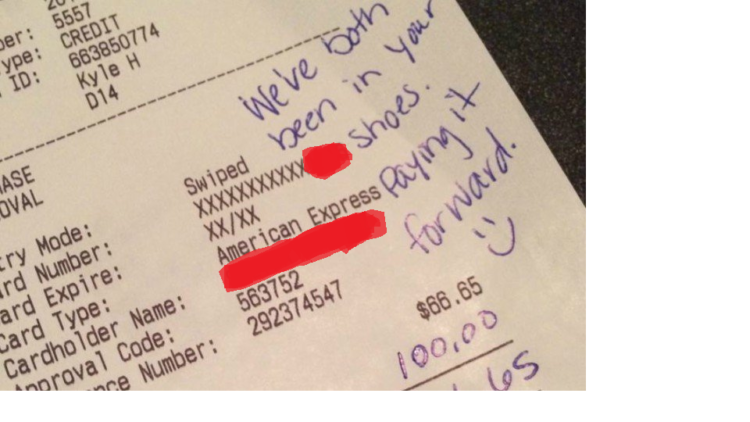 To read MacKenzie’s full Facebook post, be sure to click here. We just love that this couple decided to see the situation for what it was, and pay it forward. We hope that hard-working server enjoyed those extra hundred bucks!

What do you think of Mackenzie and Steven’s generous tip? Do you think that the waiter deserved that amount? Do you have any service industry horror stories that you would like to share? Tell us all about your thoughts and experiences in the comments section below!