In Hailey Bieber‘s latest Instagram story, she lifted up her shirt to reveal her belly. Some people do this reveal a baby bump and make a pregnancy announcement. In Hailey’s case, she was not revealing that she was pregnant, which she’s not. Instead, she was making a different kind of announcement.

According to The Mayo Clinic, “Ovarian cysts are sacs, usually filled with fluid, in an ovary or on its surface.” While most ovarian cysts don’t cause any symptoms and go away without treatment, a large cyst, like the one Hailey has, can cause pain, pressure and bloating. In serious cases, it can even cause vomiting, fever and lightheadedness. With extreme symptoms, it’s important to see a doctor right away.

Hailey explained that she is experiencing some symptoms associated with a large cyst. She wrote, “It’s painful and achey and makes me feel nauseous and bloated and cramps and emotional.”

While the cyst is uncomfortable for Hailey, she clarified that it is not endometriosis or PCOS. According to The Mayo Clinic, endometriosis is when tissue similar to what grows inside a woman’s uterus grows outside the uterus. PCOS is when small cysts grow outside the ovaries.

There are multiple types of ovarian cysts, but Hailey did not clarify what type she has; however, she did point out that she knows she is not the only one who is suffering from ovarian cysts. She wrote, “I’m sure a lot of you can overly relate and understand. We got this.” 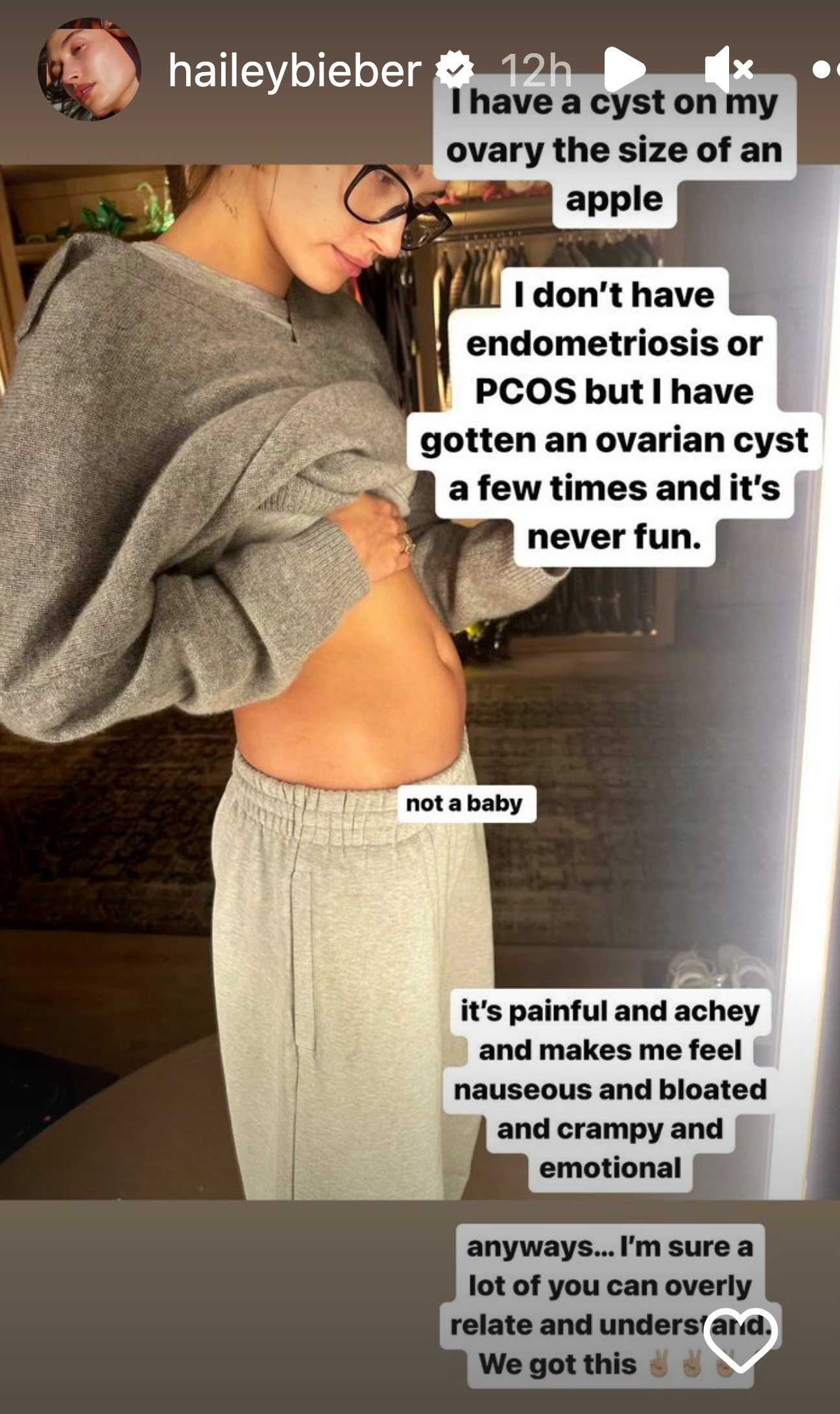 This is not the first time Hailey has shared a health issue on social media. In fact, earlier in 2022 she shared a very serious health scare that landed her in the hospital. Hailey had a mini stroke, and the doctors discovered an issue with her heart.

Hailey described the mini stroke on Instagram explaining that it was “scary.” She said that on March 10th, she was eating breakfast with her husband, Justin Bieber, when all of a sudden she felt “a really weird sensation” travel down her arm starting at her shoulder and ending at her fingertips. When Justin asked her, “Are you okay?” she was unable to speak.

At the hospital, they discovered that Hailey had experienced a small blood clot go to her brain. Thankfully, her body was able to resolve the problem quickly, but the doctors still did multiple tests while she was in the emergency room. After she was released from the emergency room, she went to UCLA to have even more tests done, and the doctors there discovered that Hailey had a small hole in her heart, and they were thankfully able to close that hole.